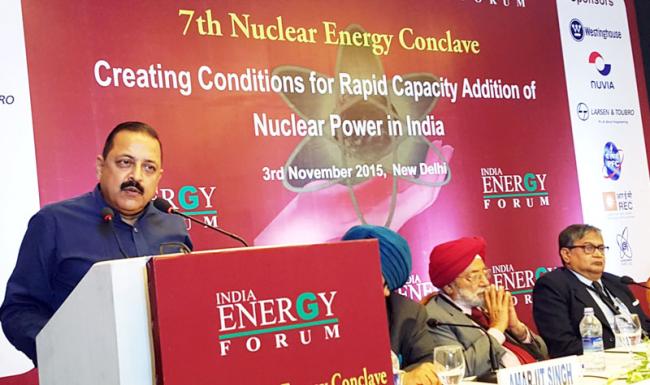 He was addressing the inaugural session of the "7th Nuclear Energy Conclave" organised by "India Energy Forum" on the theme "Creating conditions for rapid capacity addition on nuclear power in India" here.

Allaying fears and apprehensions of some manufacturers and suppliers, Dr. Jitendra Singh reiterated that the Civil Liability for Nuclear Damage (CLND) Act of 2010 does not place anybody at disadvantage. The Indian Nuclear Insurance Pool (INIP) will cover the operators’ liability under the CLND Act, 2010 and adequately address the liability related concerns of national as well as international suppliers, he said.

He appealed to the organisations like the "India Energy Forum" to help spreading awareness about India's nuclear programme and seek to clear public misgivings, if any.

Singh said, under the leadership of the Prime Minister Narendra Modi, who has a natural scientific temper, the rapid strides in the past 18 months have vindicated the dream of Homi Bhabha, the founding father of India's nuclear programme.

Today, India has become a front-runner in the world in the field of nuclear energy and has also successfully proved its ability to use nuclear energy for peaceful purposes, he added.

Singh referred to the Department of Atomic Energy’s social contribution in areas of health, literacy and clean drinking water and on the economic front, he emphasized the important future role of nuclear energy for long term energy security of India.