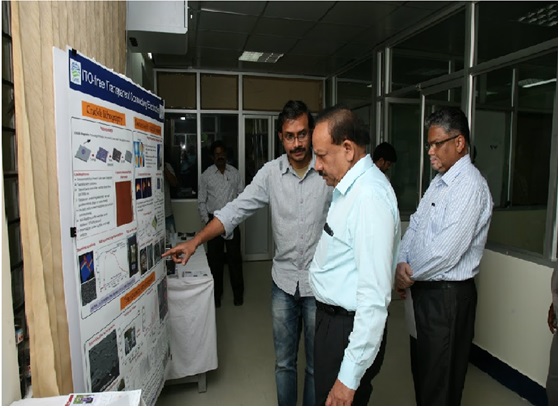 India Blooms News Service | | 23 Aug 2015, 01:02 pm
#Union Minister Harsh Vardhan, # Centre for Nano Sciences
New Delhi, Aug 23 (IBNS): Union Minister for Science and Technology and Earth Sciences Harsh Vardhan visited the Centre for Nano and Soft Matter Sciences in Bangalore on Saturday.
During his visit, he evinced keen interest in the demo kits and the poster displays presented by the research fellows of the Centre.

While interacting with the faculty, the Minister emphasized the need for quantitative output that can reach the common man in a form that is easily perceived.

Constant dialogues and brainstorming among the researchers will only help in identifying relevant scientific problems and bringing them out for the benefit of the society at large, the Minister pointed out.

He counseled young researchers to shift from routine to out-of-the box thinking and to dream big that could be translated to great innovations.

He also mentioned that the Ministry of Science and Technology is prepared to extend extraordinary support in deserving cases.
Related Images