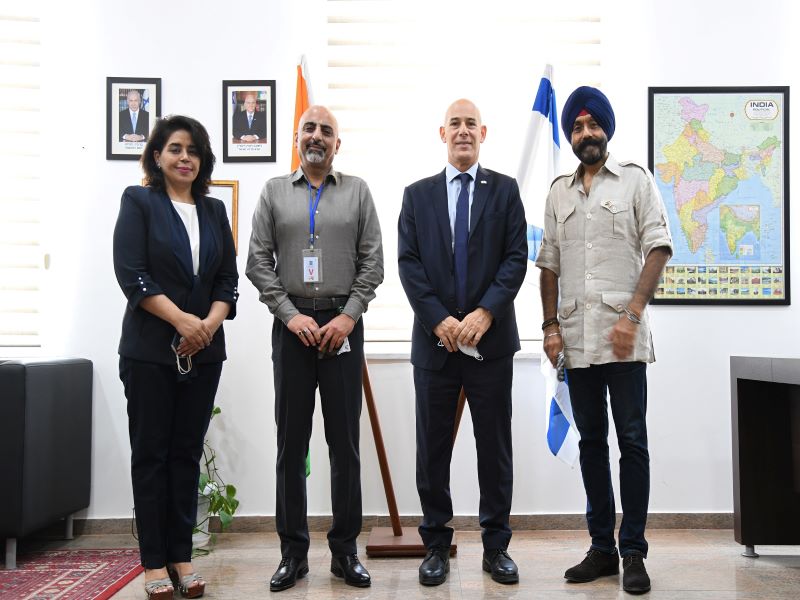 New Delhi/IBNS: The Embassy of Israel in India on Thursday announced its support for a cancer charity in India during the 'World Breast Cancer Awareness Month' amid growing partnership and friendship between Israel and India is expanding to community domains.

Ambassador of Israel in India, Dr. Ron Malka pledged Israel's support in the presence of President of ‘bcpbf -The Cancer Foundation’ Dr Sameer Kaul, and the Challenger, Mr Vicki Bedi.

This desert cyclothon will see the challenger, Vicki Bedi, cycle 2800 kms from Delhi to various cities (Bikaner, Jaiselmer, Barmer, Udaipur, Jodhpur, Ajmer, Jaipur) in Rajasthan and back, in a bid to raise money for cancer management amongst economically deprived communities in India.

Announcing Israel’s support for the event, Ambassador Dr. Ron Malka said, “We are proud to be part of the GRIT FOR LIFE initiative, which is an important endeavour towards raising Cancer awareness in different cities across India.

"As an Embassy, we look forward to participating in the desert cyclothon that will cover Cancer detection camps. Israel is one of the leading countries standing at the forefront of the fight against Cancer and is committed to conquering it with its pioneer research and cutting edge medical innovations.”

This gruelling marathon which will see Dr Malka and other Corporate Leaders cycle stretches with the challenger, also encompasses Cancer Detection Camps at EPCH’s tribal artisans cluster in Barmer, Cancer Awareness Public Lecture at Jodhpur and a visit to Indo-Israeli Centre of Excellence at Jaisalmer and Jaipur.

This event will culminate in a fundraising Gratitude Gala Dinner at JW Marriott, Aerocity, New Delhi.