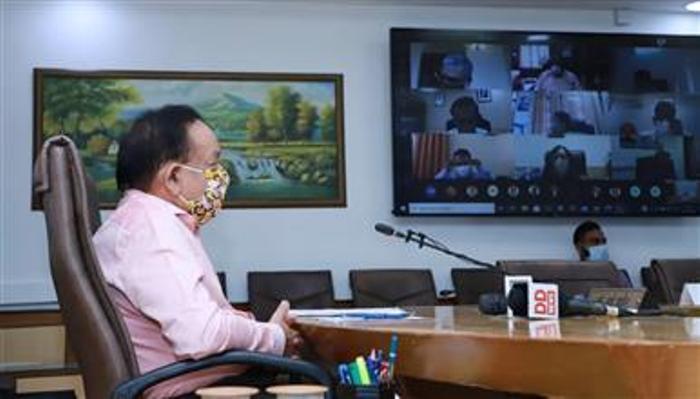 No evidence to back China’s claim of simultaneous coronanvirus outbreak across several nations: Harsh Vardhan

"There is no evidence that can validate the claims on global multiple focal point for the novel coronavirus outbreak," the Indian Minister said during an interaction with his social media followers on the sixth episode of “Sunday Samvaad”

He stated that Wuhan city in China remains recognized as the first report worldwide.

Responding to another question on the market being flooded with oximeters made in China, Dr Harsh Vardhan said: “Consumers should look for FDA/CE approved products with ISO/ IEC specifications while purchasing a pulse oximeter from the market or from the online retailers.”

However, he made it clear that a dip in oxygen saturation level is not a COVID-19 symptom, as it may happen due to other underlying medical conditions as well.

Harsh Vardhan assured that as of yet, no mutation of coronavirus has been detected in India, which is either more transmission efficient or more pathogenic.

In a follow-up to a question from the last episode, he was asked on the Phase II of the COVID-19 grants to states.

The Minister shared that the Ministry of Health and Family Welfare has already released the Phase II of the COVID Package to 33 States and Union Territories.

The total amount released in the second package amounts to a total of INR 1352 Crores.

This Phase II grant has been released in trenches during the months of August, September and October 2020.

Harsh Vardhan remarked that although there are no intranasal COVID-19 vaccines under trial in India at the moment, Serum India and Bharat Biotech are expected to pursue clinical trials of such vaccines in India in the coming months on receipt of regulatory approval.

He clarified that the Phase III Clinical Trial is generally with thousands of participants, sometimes even close to 30,000 to 40,000 participants.

It is possible that from a specific city or hospital, couple of hundred participants are selected at a given time, but in general, the overall Phase III participant pool is much larger.

Wishing people on Navratri, Harsh Vardhan said: "This festive season, charity must take precedence over celebration. My own celebrations too shall remain subdued due to the heart rending impact of COVID19 on lakhs of corona warriors across the world battling for us."

Harsh Vardhan shared his views on the recent spike in COVID-19 cases in Kerala.

Noting that between January 30 and May 3, Kerala had reported just 499 cases and 2 deaths due to COVID-19, he regretted that Kerala was paying the price of gross negligence during the recent Onam festivities when state-wise unlocking of services, along with an increase in inter and intrastate travel for trade and tourism, led to the spreading of COVID-19 cases across various districts.

“Epicurve of Kerala changed completely due to Onam festivities across the State, the daily new cases nearly doubled," the Minister said.

The Minister said this ought to serve as a good lesson for all the state government which were being negligent in planning for the festival season.