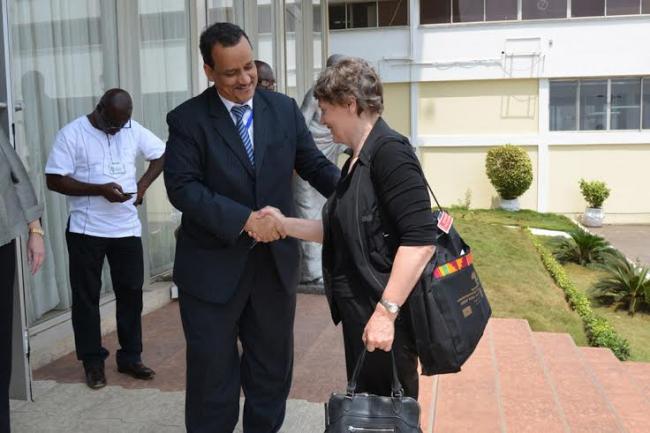 Meanwhile, UN the World Health Organization (WHO), in its latest update, reported that the number of new cases of Ebola in West Africa rose for the second straight week. WHO also noted that the fatality rate among hospitalized cases remains high – between 53 per cent and 60 per cent.

“The spike in cases in Guinea and continued widespread transmission in Sierra Leone underline the considerable challenges that must still be overcome to get to zero cases,” WHO said.

Liberia, which continued to report a low number of new cases, announced that schools will be reopened on 2 March, according to the latest update from the UN Mission for Ebola Emergency Response (UNMEER).

Helen Clark, Administrator of the UN Development Programme (UNDP) started on Wednesdaya one-week visit to West African which will include stops in Guinea, Liberia and Sierra Leone, where there have been almost 23, 000 reported Ebola cases with almost 9,000 reported deaths.

Her visit aims at affirming the continued commitment of the UN to addressing the ongoing crisis, and support for the recovery process. Secretary-General Ban Ki-moon tasked UNDP to lead the UN system on Ebola-related recovery.

As part of the overall response, UNDP’s recovery initiatives are focused on four pillars: economic opportunities and jobs; recovery of the health system; resilient governance for recovery, peace and stability; and risk management to deal with any future outbreaks.

In other news, UNMEER reported that a new study by UNDP shows that “women have been disproportionately affected by the Ebola virus because they serve as family caregivers and health workers, take part in traditional practices and rituals, and trade across borders where they come into contact with many people.”

“The disparities are most visible in Guinea’s most affected areas. In Guéckédou, for instance, women represent 62 percent of the infected, and in Télémilé, 74 percent,” according to the UNDP study cited by the UN mission report.

“The study finds large numbers of women have lost their livelihoods due to reduced productivity in agriculture, slowing down of trade and small business activity,” it said. “In addition, maternal deaths have increased because of reduced antenatal and neonatal care.”

According to the study, recovery plans should incorporate gender considerations, and countries need to put in place specific social protection programmes for women.