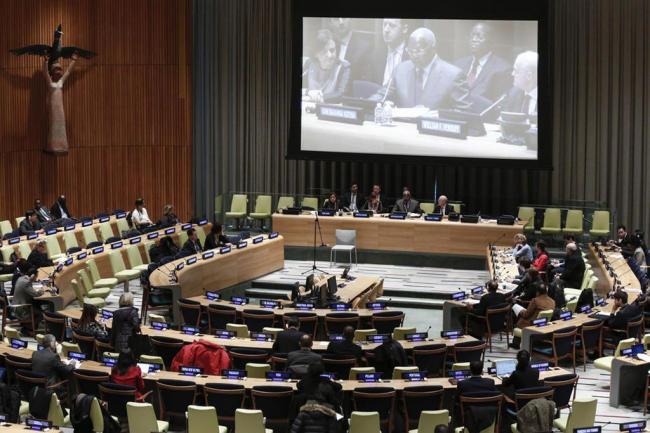 The President of the General Assembly told the event, titled “World Interfaith Harmony: Multi-religious Partnership for Sustainable Development,” that the message of peace and goodwill was as important as ever in light of the recent disturbing rise of intolerance and prejudice in many of our communities.

“As intolerance, bigotry and hatred continue to fuel conflicts, violence and extremism in many corners of the world, we need to strengthen our efforts to foster respect and mutual understanding between cultures, religions and ethnic groups,” said Sam Kutesa. “Every time we chose dialogue and reconciliation over confrontation, we take a step forward on our collective path to lasting peace.”

He referred to the Assembly’s recent meeting on the rise of anti-Semitic violence and said he would convene a high-level thematic debate in April on promoting tolerance and reconciliation.

He also looked ahead to the world’s “historic journey” towards formulation of an inclusive and transformative future development agenda, saying 2015 is a year of hope and opportunity, representing an unprecedented chance to set the world on a path toward sustainable development and to eradicate poverty and hunger.

“The task ahead of us is momentous and will require profound shifts in how we think and act,” he said. “Interfaith collaboration can not only help promote common values shared by all humankind; it can also serve as an important foundational element for the advancement of our post-2015 development objectives.”

Speaking on behalf of the Secretary-General, the UN’s new communications chief, Christina Gallach, also pointed to the principles of tolerance and respect for the others that are deeply rooted in the world’s major religions.

At the same time, she called for solidarity in the face of those who spread misunderstanding and mistrust.

“Too many communities around the world face violence and discrimination based on their religious identity,” she said. “Cowards are attacking civilians. Political figures and others are using emotive appeals to manipulate people based on their religious affiliations. Those who go down the path of violence and hatred may invoke the name of religion – but they only distort those faiths and bring shame upon themselves.”

She noted the immense influence of religious leaders and communities and highlighted the power they have to build cooperation, learning, healing and sustainable development.

“They can set an example of dialogue, and unite people based on precepts common to all creeds,” she said. “And they can point the way toward addressing underlying causes of disharmony, including poverty, discrimination, resource scarcity and poor governance.”