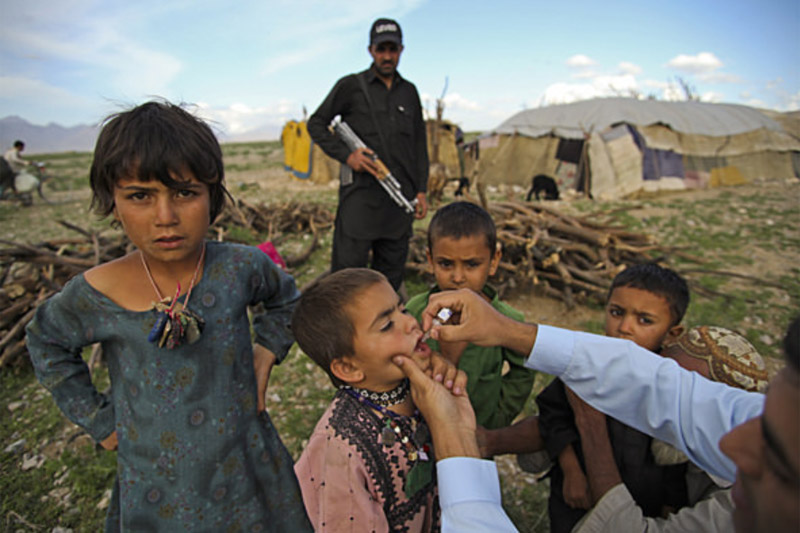 India Blooms News Service | | 24 Oct 2014, 10:55 am
#UN hails landmark global polio eradication campaign, # UN, # UN polio campaign, # Polio, # Polio eradication
New York, Oct 24 (IBNS) Every day, a thousand or so children are being protected from disability as part of a 26-year global effort to eradicate polio through a worldwide campaign that has immunized millions of previously-unreached children across the globe, the United Nations Childrenâ€™s Fund (UNICEF) said on the eve of World Polio Day.

Some 10 million people on Thursday  would otherwise have been paralyzed, while an additional 1.5 million lives have been saved through the routine administration of Vitamin A during polio vaccination drives, UNICEF said in a press release on Thursday , which outlined the successes of the Global Polio Eradication Initiative and the challenges that remain.

The annual number of polio cases has fallen from 350,000 in 1988, to 416 in 2013, and 243 so far this year – an extraordinary drop of more than 99 percent. All but three countries where polio was firmly entrenched – Afghanistan, Nigeria and Pakistan – have eliminated the virus within their borders. And multiple outbreaks have been contained over the past 26 years.

“In 1988 polio was a leading cause of childhood disability,” said UNICEF Executive Director Anthony Lake in a press release. “In country after country since then, a generation of children has grown up without the spectre of polio.”

“The success of the eradication effort – reaching some of the most disadvantaged communities in some of the most dangerous circumstances – proves that it is possible to reach all children,”  Lake added. “Our most ambitious and audacious goals for children can be met. And if they can be, they must be.”

Speaking to reporters at UN Headquarters on Thursday , Peter Crowley, Principal Adviser, Health and Polio Team Leader, of UNICEF said, “We now have an entire generation of children that has grown up without the fear – and some cases, without even knowledge – of polio,” as a result of the 26-year long international eradication campaign.

“We are almost there,” he said, explaining that nearly all cases of polio have been wiped out, even with its recent emergence in countries such as Syria and Iraq.

While UNICEF marked the successes, it was not ignoring the remaining challenges. “Eradication is not easy; it has only been accomplished once before and that was with small pox,” explained  Crowley, stressing that while the number of cases has fallen dramatically, the disease still existed.

Nevertheless, the United Nations believed that the challenges around eradicating polio are not insurmountable. To this end, he noted that is the first year the World Day was being celebrated since the UN World Health Organization (WHO) had declared polio free. This was a significant achievement, because just five years ago, India had been considered the “hardest place to reach people with the virus.”

According to UNICEF, Nigeria has had only 6 cases this year, down from 49 in 2013. Afghanistan has reduced transmission to very low levels, with most cases linked to Pakistan. With 206 cases already reported this year, Pakistan is now the world’s largest remaining reservoir of polio.

While polio remains endemic in only three countries, it continues to pose a risk to children everywhere, especially in countries which have not made routine immunization a priority, like South Sudan, the Central African Republic and Ukraine. Outbreaks in Syria, Iraq, Cameroon, Equatorial Guinea and Somalia can be traced to Pakistan and Nigeria.

UNICEF procures 1.7 billion doses of oral polio vaccine to reach 500 million children every year. And UNICEF’s social mobilization work helps persuade families to accept the vaccine when it reaches them. Intensive efforts over the past decade have seen acceptance of the polio vaccine at their highest levels ever in countries where polio remains endemic.

“The world has never been closer to this once-in-a-generation opportunity of eradicating polio for good,” Lake said. “Every child deserves to live in a polio-free world.”