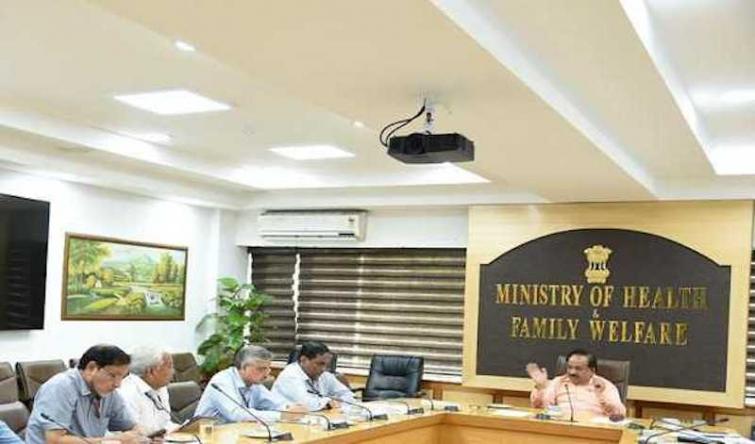 Permanent multi-disciplinary expert group to be set up in health ministry, says Vardhan

New Delhi, Jun 18 (UNI): Union Minister of Health and Family Welfare Harsh Vardhan on Tuesday discussed and deliberated on the factors causing high child mortality in the reported Acute Encephalitis Syndrome cases in Muzaffarpur district of Bihar and immediate measures to be taken up to prevent child deaths.

The issue was discussed at a meeting chaired by Vardhan along with multi-disciplinary group of experts here.

In addition to senior officers from the health ministry, ministry of women and child development, experts from AIIMS, NCDC, ICMR, IAP, WHO and CDC were present at the meeting.

After the meeting, the minister said: "In order to gain deeper knowledge into the factors causing high child mortality in Muzaffarpur and neighbouring districts of Bihar, where increased cases of AES/JE have been reported, the expert group met and deliberated at length today."

"We discussed the socio-economic profile of the households which have reported the cases, their nutrition profiles, issues such as the ongoing heatwave, reported high percentage of hypoglycemia in the children who have died, the prevailing health infrastructure in the district and other factors that could significantly be considered in these cases," he said.

Measures to further strengthen the health infrastructure, need for an aggressive awareness campaign in the preceding months when these cases are reported in higher number in order to prevent these cases, need for strengthening the research base to provide sound knowledge on the causes of mortality, active collaboration between the state and Central governments with experts and researchers, were some of the issues taken up for detailed deliberation at the meeting.

“In the spirit of collaborative and cooperative federalism, the Centre is actively supporting the Bihar government in immediate measures to contain AES/JE and also to search for long term solutions through evidence generated by sound research. Two central multi-disciplinary teams are already stationed in Bihar and supporting the government presently. Senior officers of the Health Ministry are in regular communication with the state government and providing all needed technical and other support," the minister added.

Vardhan has instructed for a permanent multi-disciplinary group of experts to be constituted at the Centre which shall draw experts from NCDC, AIIMS, ICMR, WHO, CDC, IAP, ministries of science & technology, women and child development and also include experts in the field of meteorology, nutrition, agricultural science. The group constituted at the national level will be anchored in the health ministry.

“The group should meet regularly during the year to monitor the recommendations of the two central expert teams that are presently stationed in Muzaffarpur and deliberate upon their findings and also any suggestions received from other experts in the matter," he said.

"This group shall formulate recommendations for measures to be taken up in case of an outbreak and for immediate control, in addition to a long term understanding about its causes so as to prevent the cases," he added.