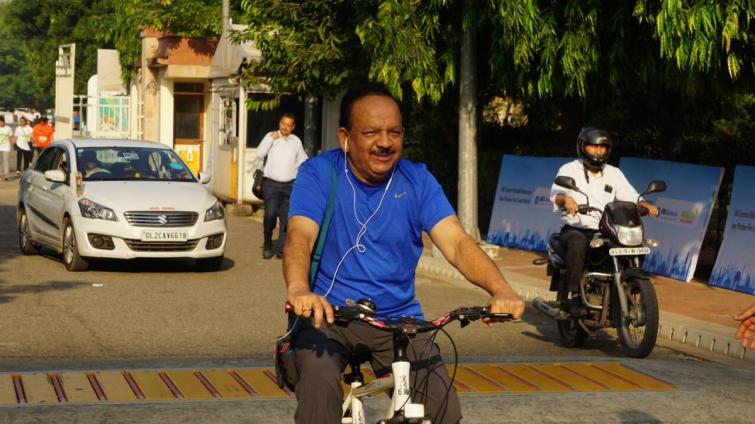 New Delhi, June 3 (IBNS): On a day when  World Bicycle Day is being observed globally, Dr. Harsh Vardhan rode a cycle to arrive in Nirman Bhawan here to take charge as the Indian Health Minister.

Vardhan said he will take all efforts to serve the country.

"Will take forward the vision of Hon. PM Narendra Modi in the health sector. Will make all efforts to serve the country," he said.

Narendra Modi took oath as the Prime Minister of the country for the second straight term on Thursday.

Under his leadership, the Bharatiya Janata Party-led NDA won the Lok Sabha polls this year to form the government for a second straight term.

Meanwhile, West Bengal Chief Minister Mamata Banerjee also tweeted on  World Bicycle Day and said: " Today is #WorldBicycleDay. A bicycle is not just a means of transport but an instrument of empowerment too. The #Bangla Govt has distributed over one crore bicycles to students under Sabooj Sathi scheme. These cycles have enabled them to attend school even from far-off places."

"The Sabooj Sathi project was declared a ‘Champion Project’ at the World Summit on the Information Society (WSIS) Prizes, given by ITU, a United Nations organisation in April, 2019, out of 1,140 projects across 18 categories. #WorldBicycleDay," she said.