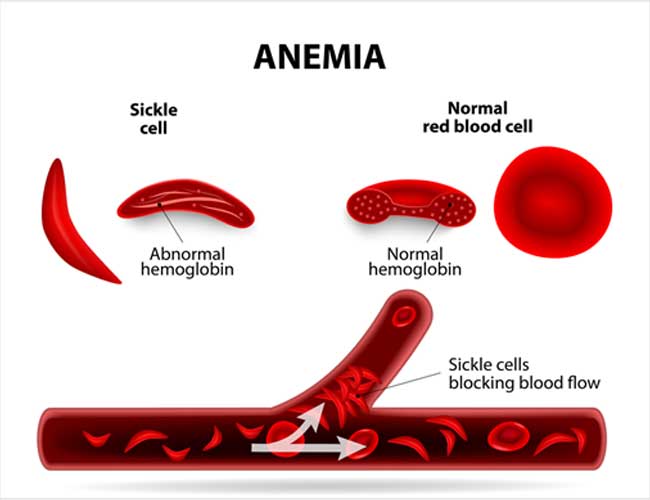 5Things You Should Know About Sickle Cell Anaemia

The rate of people having sickle cell anaemia is close to almost 35 percent in few Indian communities, according to the Anthropological Survey of India. The disease is still not documented in the country as it should be and thus there is utter ignorance and unawareness amongst the people. In central India, especially in the Deccan Plateau, the disease is now a thing to be really concerned about as it has become a widespread phenomenon.

What is Sickle Cell Anaemia?

Sickle Cell Anaemia is commonly known as ‘Sickle Cell Disease’or SCD. It is causeddue to genetic abnormality where the red blood cells or RBCs are of abnormal shape imitating a sickle and thus cannot travel through the finer blood vessels causing damage of tissues and cells in the body. This, in turn, causes pain and other problems which can be, at times, life-threatening. RBCsare the main component of blood carrying oxygen,and thus if the flow is restricted, health problems are bound to happen.

If both the parents have SCD, then their child will inherit the disease due to the transfer of two SCD genes. However, if only one parent has SCD, then due to transfer of only a single gene, the child will have ‘Sickle Cell Trait’ or SCT. If the couple has SCT (both) or one has SCD,and the other counterpart has SCT, then too the child is bound to get the diseases. If the couple has thesetraits, they should always consult a doctor before planning the family. But the good news is, if a person is born with SCT, he or she cannot develop SCD in the future.

This disease is found in different parts of the world whether it is in the US, UK or Africa. In Africa, the disease is widespread,and the numbers are growing epidemically. In India, as mentioned before,certain groups or communities have this problem in huge number.

3. Medical Protocol That Needs to Be Followed

In US, for every couple and babies born,tests are conducted to detect whether they have sickle cell disease or it’s trait. If the diseaseis detected in the earlier stage; the effects of the diseases can be monitored and controlled with proper measures. In India, the same protocol needs to be followed as number of individualsdetected with SCD is growing.

There are different types of SCD or SCT,and accordingly, the severity of the disease varies. The deadliest is the Sickle Beta-Zero and the Hemoglobin SS. The next in the level of severityisHaemoglobin SC which is the second most common type, followed by Sickle Beta PlusThalassemia.

5. Effects of SCD on The Body

As RBCs cannot reach to their destined organs at the right time, this cuts down the flow of red blood cells and causes damage to the heart, eyes, gallbladder etc. Few most common ill effects of this disease are the destruction of the eyesight, stones in the gallbladder, anaemia, heart attack, strokes and severe bacterial diseases. Moreover, cardiac complications are a common feature of SCD and are an importantcause of the morbidity associated with this disease.Besides, the risk of having a stroke is higher for babies and kids who are born with SCD than the adults. A person with anaemia and SCD suffers the most as the blood cells count is already lower due to anaemia and on top of that SCD makes it worse. This could cause deadly infections and spleen enlargement which can be life-threatening.
Is There Any Cure for SCD orSCT?

Since it is an inherited disease; firstly, it can be controlled by proper family planning. The couple must discuss being an SCD or SCT well in advance before planning a family. The treatment for people having this disease is very tough as it may includethe transfer of bone marrow, which is difficult for every patient. For the newborn babies, the disease can be treated if proper measures are taken from the early days.

In many parts of the country, ‘Sickle Cell Anaemia Control Societies’ are formed to spread awareness and research about this disease. States like Gujarat and Maharashtra are working on it efficiently along with National Rural Health Mission Commission. In some parts, even genetic counselling has been started to remove this disease from the roots.

Having understood the severity of this disease, it is prudent to be prepared for the same financially if such untoward situation arises. Because of the known link between sickle cell anaemia and heart diseases, having a heart insurance plan can be of much help in case of any uncertain medical eventuality. Cancer and heart insurance plan canhelp to counter the growing health care cost and provide you with what other traditional health plans may not provide - a lump sum payout on detection, without the need to produce any medical bills. Moreover, the lump sum received will not only help pay for the medical costs but also ensure that your income never stops.