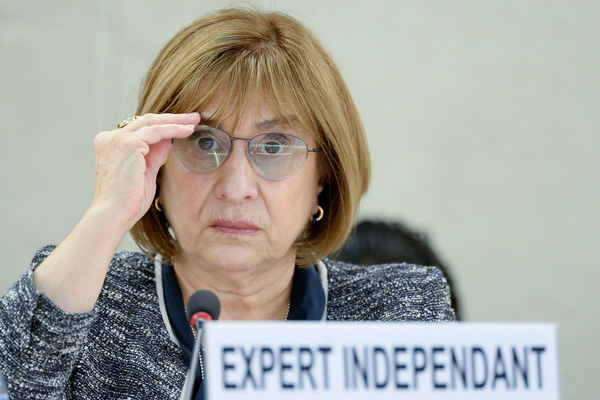 Ahead of Alzheimer's Day, UN expert urges greater protections for people with dementia

“The voices of older people and those who look after them need to be heard in a meaningful way,” said Rosa Kornfeld-Matte, the UN Independent Expert on the enjoyment of all human rights by older persons.

Speaking ahead of World Alzheimer’s Day, marked annually on 21 September,  Kornfeld-Matte called for concerted action to ensure that older persons suffering from Alzheimer’s disease or other forms of dementia can fully enjoy their human rights in all circumstances.

“The whole of society shares responsibility for the welfare of older persons with dementia and is called upon to find comprehensive solutions,” the UN expert said.

According to the UN World Health Organization (WHO), dementia is a syndrome, usually of a chronic nature, caused by a variety of brain illnesses that affect memory, thinking, behaviour and ability to perform everyday activities. Alzheimer’s disease is the most common cause of dementia and possibly contributes to up to 70 per cent of cases.

The number of people living with dementia worldwide is currently estimated at 35.6 million, and this is expected to double by 2030 and more than triple by 2050.

“Dementia should not be considered as a normal part of ageing. Dementia is a disease, and can be the result of multiple factors,” the Independent Expert said. “States and other stakeholders need to raise awareness and to adopt a human rights-based approach to protect the rights and dignity of older persons with dementia.”

Older persons suffering from Alzheimer’s disease and other forms of dementia often face violations of their human rights, abuse and neglect, as well as widespread discrimination. As their autonomy decreases, they are moreover progressively deprived of their political, civil, economic, social and cultural rights.

“States need to take appropriate action to ensure that older persons affected by dementia can still participate in the public life of their communities,” said  Kornfeld-Matte. This includes providing accessible information and the support they need, both human and technical, to facilitate their continued participation in public life and in the decisions that affect them.

World Alzheimer’s Day was launched in 1994 by Alzheimer’ Disease International, an international federation of 84 Alzheimer associations around the world, in official relations with the WHO.