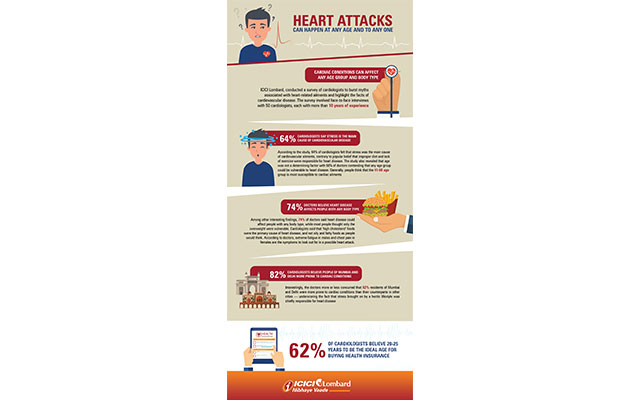 According to the study, 64% of cardiologists felt that stress was the main cause of cardiovascular ailments, contrary to popular belief that improper diet and lack of exercise were responsible for heart disease. The study also revealed that age was not a determining factor with 68% of doctors contending that any age group could be vulnerable to heart disease. Generally, people think that the 41-50 age group is most susceptible to cardiac ailments.

Among other interesting findings, 74% of doctors said heart disease could affect people with any body type, while most people thought only the overweight were vulnerable. Cardiologists said that ‘high cholesterol’ foods were the primary cause of heart disease, and not oily and fatty foods as people would think.

According to doctors, extreme fatigue in males and chest pain in females are the symptoms to look out for in a possible heart attack.

The cardiologists were unanimous in their view that those who exercised regularly were less vulnerable to heart disease, though 86% said men were more susceptible than women. Interestingly, the doctors more or less concurred that residents of Mumbai and Delhi were more prone to cardiac conditions than their counterparts in other cities — underscoring the fact that stress brought on by a hectic lifestyle was chiefly responsible for heart disease.

Sanjay Datta, Chief - Underwriting Claims and Reinsurance, ICICI Lombard, said, “We, at ICICI Lombard, constantly endeavour to raise awareness about the importance of a healthy and balanced lifestyle. The growing incidence of heart disease among the young and middle-aged is a wake-up call for people to take charge of their health by making small changes in their day-to-day habits and lessen the risk of heart ailments. To encourage healthy living, we reached out to noted cardiologists for their views on the myths and truths of heart health. The resultant survey throws light on the causes and consequences of heart disease and offers valuable hints on preventing the same by incorporating wellness strategies into our lives.”

In other findings, 62% of cardiologists believe 20-25 years to be the ideal age for buying health insurance and an average coverage of Rs 4.15 lakh for heart-related diseases.