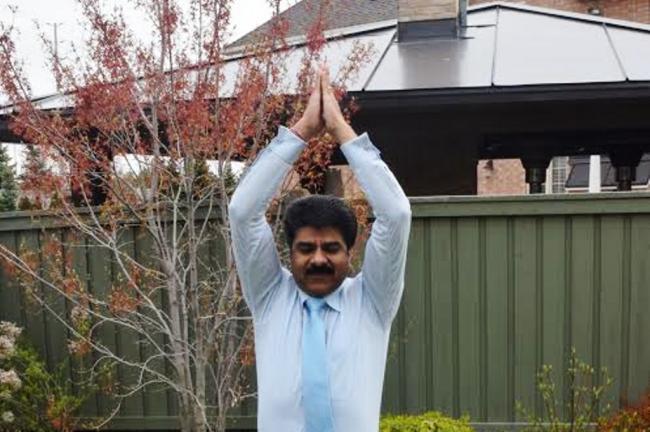 India Blooms News Service | | 21 May 2017, 12:22 pm
#Yoga, #YogaDay, #InternationalYogaDayCanada
Toronto, May 21 (IBNS): The popularity of Yoga is rising all over the world in recent times and Canada is no exception.

"Yoga contributes directly to human happiness," said Satish Thakkar, Founder and Chairman of the Board of Directors of the International Yoga Day Canada (IYDC) which will be celebrated at the International Centre in Mississauga on June 25 next.

The health benefits of the practice are both physical and mental, he said.

“In the 21st century, happiness index has also emerged as an important parameter of economic development, and here again yoga contributes directly to human happiness. It is time for a change in the approach to health care by paying more attention to prevention," he says.

" The advocacy of yoga as an alternative form of health care can bring about a substantive change in reducing health care costs and promoting overall well being of Canadians. Equally, yoga is directly instrumental in enhancing productivity thereby contributing to economic progress” Thakkar added.

Giving an emphasis on the benefits of yoga, the third International Day of Yoga will be celebrated at the International Centre in Mississauga on  June 25, 2017 where world renowned Yoga guru Baba Ramdev will lead the practice of yoga in the morning while Sister Shivani, with a following of over 200 million, will lead the meditation in the evening.

More than 10,000 people are expected to participate in the IYDC celebrations, said Thakkar who himself does 60 minutes of yoga every day.

“Yoga’s rising acceptance among the masses is because it is inexpensive and inherently simple to practice. All it requires from the practitioner is discipline and dedication.

"Pertinently, by involving the mental faculties as keenly as physicality, yoga transcends from being a mere exercise routine and transforms into an instrument to alleviate both body and mind. Yoga is at the root of the mindfulness and wellness endeavours that advocate a holistic approach to the understanding one’s existence both by knowing one’s minds and one’s body,” said the Yoga proponent, the chair of IYDC,  the not-for-profit organisation formed in 2015 to promote yoga in Canada.

Organizations with a global footprint engaged in popularising and propagating the virtues of yoga are collaborating with the IYDC for the programme.

According to statistics, yoga has grown by over 70 percent in the United States in the last five years, indicating a spiralling popularity of an ancient form of self-purification and self-actualisation technique which originated in India.

Purely from a commercial standpoint, in the United States, yoga is estimated to be over a $30 billion industry.

In Canada, said Thakkar, the healthcare system is under a severe strain already and the financial burden of a rapidly aging demographic is expected to grow exponentially in the near future. The population of seniors are outnumbering youth, a situation that has major implications on health care budgets.

The situation is going to get aggravated, said Thakkar.

“It is time for the Canadian health care establishment to look at alternative forms of medicine. In the 21st century, the practice of yoga has become the most effective means to counter many of aliments whose roots lie in sedentary and static urban lifestyle.

"The Conference Board of Canada has estimated recently that depression related ailments cost the Canadian economy $32 billion and similarly anxiety related ailments cost $17 billion. Yoga has proved to be one of the most effective methods to reduce the both. The practice of yoga also provides soothing mental equilibrium” Thakkar added.