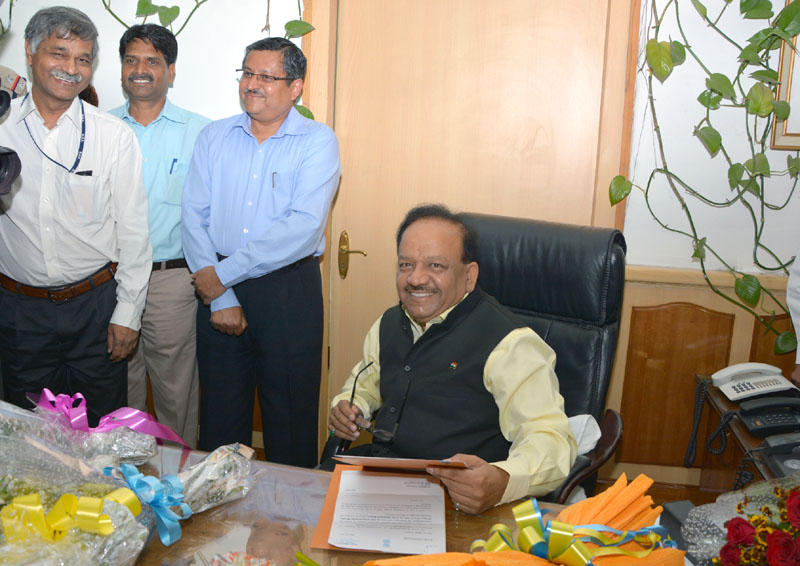 In a statement on the occasion, Harsh Vardhan asked fellow doctors to “introspect and rebuild the lost glory of the medical profession.”

“I became a member of IMA in 1984 and have held responsible position in its management. The pride I feel being a member of the oldest Indian professional forum of medical practitioners cannot be expressed in mere words. I wish it all success in the years ahead,” Harsh Vardhan said.

The year-long celebrations of the centenary, which officially falls on Aug 14, concluded with a function on Sunday at Vigyan Bhawan here.

That, in the Minister’s view, would be the highest tribute to Dr Ansari and his team of founders of DMA.

Dr Ansari is counted as one of the first Indian surgeons. There is still a ward in London’s Charing Cross Hospital named after him. A medical man who believed in service before self, he is credited with organising the first Indian medical team to be organised for overseas relief work.

In 1912, he led a team of doctors to Istanbul to assist the people rendered homeless during the Balkan War.

A nationalist to the core, Dr Ansari was a member of both Congress and Muslim League. He was the president of the Muslim League for two terms. Under him the DMA whole heartedly supported Mahatma Gandhi’s call for Non-Cooperation and Khilafat in 1921.

Throughout the 1920s and 1930s, the DMA responded to the Congress’ appeal for medical relief in all parts of India affected by natural disasters or epidemics.

Dr Ansari was therefore the inspiration for Dr Dwarakanath Kotnis who was moved by Netaji Subhas Chandra Bose’s appeal and went to China with a team of doctors in 1938 to treat the people affected by Japanese invasion.

In 1971, DMA assisted the Indian government’s refugee relief operations when millions of refugees poured into the country from the erstwhile East Pakistan.

The first office of DMA was opened in 1926 as a part of the Jamia Masjid Dispensary. In the same year a plot was acquired in Ansari Nagar. Gradually money was raised for a DMA building, which eventually came up in 1933 during the presidency of Dr J.P. Saini. In 1954, the then DMA president, Dr B.K.Sikand, started the process of constructing a new building which took nine years to complete.

Harsh Vardhan said, “I would like to see DMA reviving its social mission and contributing to the government’s Health for All objective. I would like to involve all sections of society in achieving the United Nations Millennium Development Goals.”

In 1994, Harsh Vardhan had the unique position of being both President of DMA and Health Minister of Delhi.

The country’s first Pulse Polio drive, which Harsh Vardhan organised on Oct 2 that year, got full cooperation from DMA members along with representatives of all sections of society.

“The social mobilisation achieved for pulse polio is unprecedented in terms of scale and reach. This was possible because people observed the professional commitment of doctors at the heart of the mission. I hope to revive this spirit in the coming months when I launch drives against preventable deaths of infants, children and new mothers. I need the cooperation of doctors to raise awareness on lifestyle faultlines at the root of non-communicable diseases like hypertension, coronary artery disease, diabetes and cancers,” the Minister said.

The medical community of India is presently under scrutiny for instances of unethical practices on the part of some doctors, the Minister stated.

Though the vast majority of doctors are faultlessly devoted to duty, some are giving the profession a bad name, he added.

“I urge the DMA to hold workshops for young doctors where they should be instructed on rational prescription of drugs and generic medicines. They should also be encouraged to advise their patients on steps they should take to prevent the recurrence of their diseases because about 40 percent of the disease burden has its origin in lack of physical exercise on the part of the patient,” Dr Harsh Vardhan said.