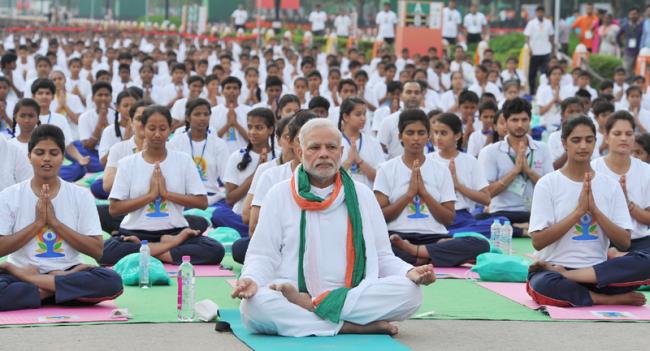 No. of yoga practitioners soars by up to 30% across metros in India: Survey

"There has been a spurt in number of people that have taken up yoga by up to 30 per cent, most of whom have been inspired by many celebrities and media attention that it has garnered," noted a survey on 'Yoga or Gym,' conducted by the ASSOCHAM Social Development Foundation in 10 metros - Ahmedabad, Bengaluru, Chennai, Delhi-NCR, Hyderabad, Indore, Jaipur, Kolkata, Lucknow and Mumbai.

ASSOCHAM representatives interacted with 100 gym trainers/fitness professionals and about 1,000 people sweating it out at the gymnasiums across the aforesaid cities to ascertain which is a better workout regime.

The survey was conducted during the course of past two months in wake of the International Day of Yoga celebrated globally on June 21.

Majority of the gym trainers said that there has been an increase in number of female clients by over 50 per cent since they began conducting yoga sessions at their gymnasium and in general the number of yoga practitioners has fuelled by about 25-30 per cent during the course of past one year.

On being asked which is a better workout regime, about 25 per cent gym regulars said they had switched to yoga after first few sessions owing to increased flexibility, toning, strengthening and other such benefits of meditation and breathing exercises, noted the ASSOCHAM survey.

Besides, many even said that yoga has helped them fight everything from addiction and lower back pain to diabetes and aging, in addition to boosting overall well-being and stress relief.

Additional benefits like improved digestion and concentration together with less of fatigue and tiredness has helped people in performing better at work and some even said that they no longer feel guilty if at all they skip going to gym by a day or two as yoga can be practised at home and even at office.

However, majority of gym trainers advised to combine yoga and gym sessions to get desired results of physical benefits and mental stimulation.

"Yoga has grown in India from an ancient spiritual practice to big business and premium lifestyle, considering that there are an estimated four crore yoga practitioners across the country spending about Rs 1,000 crore on designer yoga-wear, mats, towels, luxury retreats thereby promoting the fitness industry," said D.S. Rawat, secretary general of ASSOCHAM while releasing the findings of the ASSOCHAM survey.

"Yoga which can be traced back roughly 5,000 years, is a tradition that has stood the test of time, more so in a world of exercise trends and diet fads," said  Rawat.

"One of the key reasons for increased popularity of yoga is that of late it has developed as a panacea for the ailments of modern society — tech overload, disconnection and alienation, insomnia, stress and anxiety," he added.

"The sudden boom of interest in yoga will fuel the demand for getting more trained yoga instructors, yoga studios and gymnesiums across India in the coming future," further said Rawat.

Yoga also holds significant potential to boost both domestic and foreign travellers' inflow, especially in places like Rishikesh and others to become certified yoga instructors’, demand of whom is likely to surge in wake of the growing popularity as yoga goes mainstream, highlighted the ASSOCHAM survey-cum-analysis.