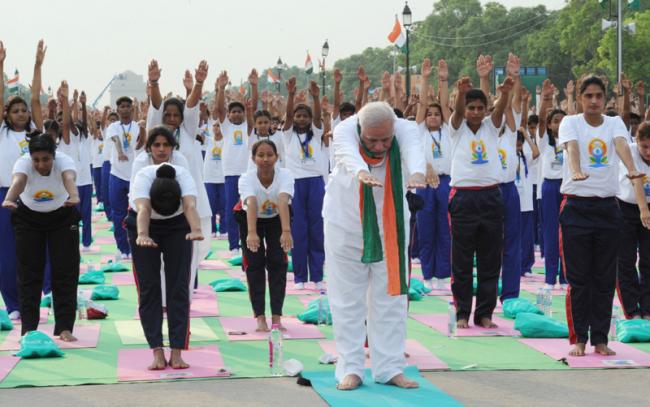 The function will begin at 6.30 am and will include 45 minutes of Yoga protocol demonstration. Over 35 thousand people are expected to participate in the event at Capitol Complex, Chandigarh while ten thousand more will perform at 100 different venues in the city of Chandigarh. The emphasis this year will be on participation of Divyangs, youths and people from weaker sections of the society.

Reputed Yoga institutions will participate in the International Day of Yoga by leading the demonstration functions across the country. Yoga demonstrations will also be organized at several places in the national and state capitals.

Similar events have been planned at all district headquarters in the country in association with prominent Yoga institutions of the country.

In the National Capital Territory Delhi, the main events organized by Ministry of AYUSH and New Delhi Municipal Council (NDMC) will be at Connaught Place, Lodhi Garden, Nehru Park and Talkatora Garden. Union Minister for Urban Development Venkaiah Naidu, Lt. Governor of Delhi Najeeb Jung and Member of Parliament Meenakashi Lekhi will participate in the Yoga demonstrations in Delhi. Other major Yoga events that will take place in Delhi will be in Dwarka, Rohini and Yamuna Sports Complex.

Over 173 Indian missions across the world are also organizing Yoga demonstrations to spread awareness for International Yoga Day. Besides the main event on the Yoga Day, several Indian missions have organized a series of curtain raiser events in various parts of the world to spread Yoga awareness.

In his remarks at the International Conference on Yoga for Holistic Health organized on the Yoga Day last year, Prime Minister Narendra Modi had described Yoga as a "state of mind" (avasthaa), as opposed to being a commodity or a system (vyavasthaa). Remarking on the importance of Yoga Day being celebrated simultaneously across the world, the Prime Minister had added that the solidarity being expressed through Yoga, in the coming together with brothers and sisters in other countries, brings our hearts and minds closer.

A theme song for International Day of Yoga, named ‘Yog Geet’ has been released this year in addition to the Yoga Protocol of forty five minutes. This song is of 3 minutes and 15 seconds in Hindi language. The song is written and produced by DeerajSaraswat and Sh. Gandhar T.D. Jadhav and Ms. Gatha Jadhav have given their voice to the song. Music has been composed by Sumanto Ray.

The Ministry of Human Resource Development has taken up the initiative 'Yoga Olympiad' with participation from school children from government schools in order to promote Yoga.

International Day of Yoga was organized successfully in India and throughout the world for the first time last year, after United Nations General Assembly, in December 2014, declared 21st of June as International Day of Yoga. Last year’s mass demonstration of Yoga protocol at Rajpath in Delhi had entered the Guinness Book of World Records for largest number of participants learning Yoga at a single venue (over 35 thousand) and also for participants from most number of countries (84).