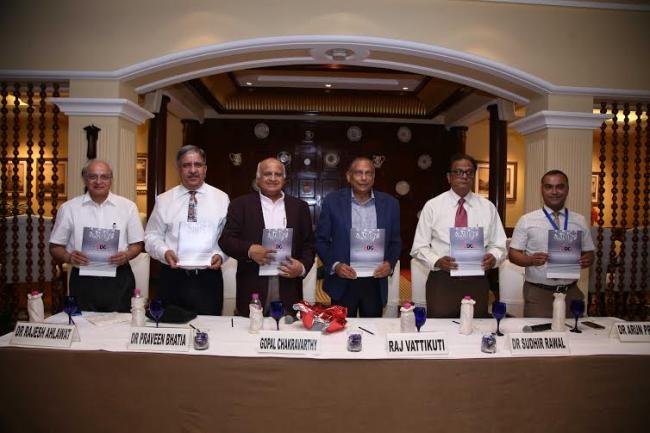 Robotic surgeries provide succor to patients suffering from prostrate, gynecological, head & neck, lung and colorectal cancer as the chances of errors are minimized, procedures don’t cause scarring and recovery is faster. Currently there are just 190 robotic surgeons in India across 30 hospitals. The plan is to expand the pool of accomplished robotic surgeons to 500 by 2020 and cover 100 hospitals. A comprehensive plan, formulated by Vattikuti Foundation, addressing three critical components--surgeon training, geographic reach and complete packages, which benefit the economically weaker sections--was announced here, today, by its founder Raj Vattikuti, a US based IT entrepreneur and philanthropist. {image_1} Among others present at the event who highlighted the benefits of robotic surgery were Dr Arun Prasad, Senior Consultant Surgeon, Minimal Access Surgery, Apollo Hospital, Dr Praveen Bhatia, Senior Consultant, Minimal Access & Bariatric Surgery Centre, Sir Ganga Ram Hospital,Dr Rajesh Ahlawat, Chairman, Urology and Renal Transplantation, Fortis Escorts' Hospital andDr Sudhir Rawal, Rajiv Gandhi Cancer Institute & Research Centre, Director Surgical Oncology & Chief of Uro - Gynae Surgical Oncology.  The plan is tailor-made for India, as the number of cancer cases has risen alarmingly but only 36 per cent of the reported cases got treated. Moreover, nearly 76 per cent of cancer patients hailed from non-urban areas, where access to cancer detection and treatment is a distant dream. The need therefore is to expand the pool of trained surgeons to non metro cities. “We will grow the pool of accomplished Robotic surgeons to 500 besides motivating young surgeons to adopt robotic surgery. As its contribution, Vattikuti Foundation, will offer 100 paid fellowships to super specialist surgeons, over the next 5 years, to become Robotic surgeons,” says Raj Vattikuti, who has been evangelizing Robotic Surgery in India since 2010 through The Vattikuti Foundation.  “Even though 4,000 robot-assisted surgeries were performed in 2015, representing a five-fold increase in 5 years, India has not even scratched its potential, as the benefit can be passed to the masses beyond metro locations,” adds Raj Vattikuti. Vattikuti Technologies, which makes available da Vinci Surgical Robots, from Intuitive Surgical Inc. in India, will work with Government Cancer hospitals, Corporate Healthcare chains, and Trusts, to acquire the most appropriate Surgical Robots. {image_2}Vattikuti Technologies shall enhance access to Robotic surgery, covering specialized cancer centers, large government hospitals and small hospitals in Tier-2 and Tier-3 cities. In the North, the Foundation will be targeting Bhopal, Delhi NCR, Jabaplur, Lucknow, Ludhiana, Varanasi and Srinagar.  “Vattikuti Technologies and Intuitive Surgical shall work together to offer hospitals special price points as they achieve 450 procedure mark over three years. This move will ensure availability of cancer surgery closer home for patients at prices that make robotic surgery affordable to the masses,” says Gopal Chakravarthy, CEO, Vattikuti Technologies. Adoption of Robotic Surgery by government hospitals will ensure treatment to people who can’t afford private healthcare but deserve the latest medical attention. The government hospitals typically adopt a dual pricing system--charge only those who can afford. Robotic Surgery in India: The Journey So Far In the last 5 years, multi-disciplinary Robotic Surgery has established its value in India with documented superior patient outcomes and efficacy. The Vattikuti Foundation has helped expand Robotic Surgery to 30 hospitals in a dozen Indian cities, in just five years, while the number of trained robotic surgeons has grown to 190. Vattikuti Foundation began promoting Robotic Surgery in the US in 1997 and has since played a stellar role in spreading it across the USA, Europe and India. Under the Vattikuti Foundation program, surgeons working at the Vattikuti Urology Center at Henry Ford Hospital in Detroit developed procedures for Prostate Cancer surgery which has become the Gold standard--Robotic Prostatectomy--in the US. Since then the Foundation has been working with surgeons around the world to pioneer various Robotic procedures including one for kidney transplant, developed co-operatively by Indian surgeons from Hospitals in Delhi and Ahmedabad.  Indian surgeons have been adapting to this new–age tool with great enthusiasm and skill. At the recent Robotic Surgeons’ conference hosted by the Foundation, over 120 Robotic Surgeons participated and shared their experience and techniques.