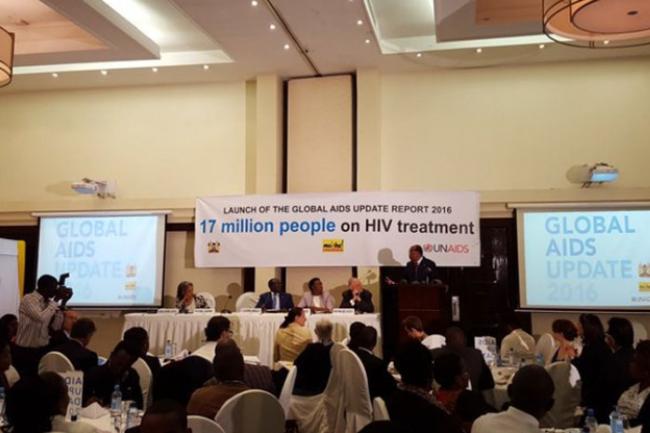 “I urge all countries to seize this unprecedented opportunity to put HIV prevention and treatment programmes on the fast track and end the AIDS epidemic by 2030,” Michel Sidibé, Executive Director of the Joint UN Programme on HIV/AIDS (UNAIDS) said upon the launch of a new report, Global AIDS Update 2016.

Released ahead of the UN General Assembly’s High-Level Meeting on Ending AIDS, slated for 8-10 June, the report shows that global coverage of antiretroviral therapy reached 46 per cent at the end of 2015. Gains were greatest in the world’s most affected region, eastern and southern Africa, where coverage increased from 24 per cent in 2010 to 54 per cent in 2015, reaching a total of 10.3 million people.

In South Africa, 3.4 million people had access to treatment, followed by Kenya with nearly 900,000.

The extraordinary scale-up of antiretroviral treatment since 2010 has reduced AIDS-related deaths from 1.5 million in 2010 to 1.1 million in 2015. As more countries adopt new guidelines from the World Health Organization (WHO) to treat everyone diagnosed with HIV immediately, public health benefits are being realized for individuals and for wider society.

The report was launched in Nairobi, Kenya, one of the countries showing the most remarkable progress in expanding access to antiretroviral medicines and reducing the number of new HIV infections.

“The Kenyan government, in partnership with UNAIDS and other development partners, is committed to the fast-track approach to ending AIDS as a public health threat by 2030,” said Cleopa Mailu, Kenya’s Cabinet Secretary for Health. “We must catalyse investments across different sectors, with a focus on cost-effective and socially inclusive programmes, if we are to succeed.”

Reaching the 2020 treatment target will set the world on course to end the AIDS epidemic by 2030 as part of the Sustainable Development Goals (SDGs).

Preventing new HIV infections by countering stigma and discrimination and ensuring that 90 per cent of people have access to HIV combination prevention services will also be crucial to ending the AIDS epidemic.

The report shows that declines in new HIV infections among adults have slowed alarmingly in recent years, with the estimated annual number of new infections among adults remaining nearly static at about 1.9 million. The global figure masks striking regional disparities that must be addressed to achieve the reductions required to end the AIDS epidemic by 2030.

The largest reduction in new adult infections occurred in eastern and southern Africa. There were about 40,000 fewer adult HIV infections in the region in 2015 than in 2010, a four per cent decline.

In the report, UNAIDS urges countries to continue to scale up HIV prevention efforts while continuing to roll out treatment, since many people are still not being reached. Young people and adolescents, especially young women and girls, are still being left behind in the AIDS response.

In sub-Saharan Africa, adolescent girls and young women account for 25 per cent of new HIV infections among adults. Harmful gender norms and inequalities, obstacles to education and sexual and reproductive health services, poverty, food insecurity and violence are the key drivers of this increased vulnerability.

The report also shows that more than 90 per cent of new HIV infections in central Asia, Europe, North America, the Middle East and North Africa in 2014 were among people from key populations and their sexual partners, including gay men and other men who have sex with men, sex workers and people who inject drugs. In sub-Saharan Africa, key populations accounted for more than 20 per cent of new HIV infections. These groups of people are still not being reached with HIV prevention and treatment services despite having the highest rates of HIV prevalence.

The report urges countries to work closely with partners, particularly civil society, communities and people living with HIV, to ensure that they know where their epidemics are concentrated and that they have the right services in the right places.