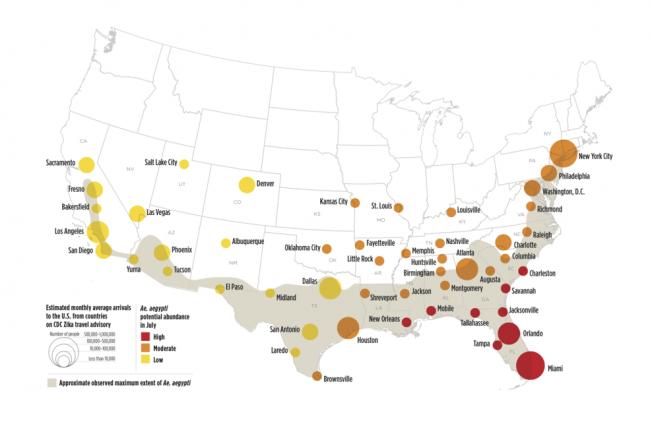 Scientists at the agency's Marshall Space Flight Center in Huntsville, Alabama, have partnered with the National Center for Atmospheric Research in Boulder, Colorado, and other institutions to forecast the potential spread of Zika virus in the United States, read the NASA website.

The research team looked at key factors -- including temperature, rainfall and socioeconomic factors -- that contribute to the spread of Zika virus to understand where and when a potential outbreak may occur. Their final product, a Zika risk map, can help government agencies and health organizations better prepare for possible disease outbreaks related to the spread of the virus. The researchers described their findings in the peer-reviewed journal PLOS Current Outbreaks.

To determine the potential risk in the mainland United States, Morin, Quattrochi and their colleagues applied methodology being employed in their current vector-borne disease project to potentially identify and predict the spread of Zika in 50 cities across the U.S. in or near the known range of the species. The team has studied this mosquito species for years, because it also transmits the dengue and chikungunya viruses.

The research team found that the Aedes aegypti mosquito, which is spreading the virus, will likely increase in number across much of the southern and eastern U.S. as the weather warms across those regions in the coming months. Summertime weather conditions are favorable for populations of the mosquito along the East Coast as far north as New York City and across the southern tier of the country as far west as Phoenix and Los Angeles.

"The results generally confirmed many of our suspicions about the relative risk of Zika virus transmission in the U.S.," said Cory Morin, a NASA postdoctoral program fellow with Marshall’s Earth Science Office. "However, there were some surprises, such as the northern extent of Aedes aegypti potential survival during the summer months. This suggests that the mosquito can potentially survive in these locations if introduced during certain seasons, even if it hasn’t or can’t become fully established."

While the virus is not new, its presence in the Americas is. Officials in Brazil reported the first case of human infection in the region last spring. Since then, it has spread throughout South and Central America, and the Caribbean. No locally-transmitted Zika cases from mosquitoes have been reported in the continental U.S., but cases have been reported in travelers returning from areas where Zika virus is present and in U.S. territories. As Zika virus continues to spread, the number of cases among travelers visiting or returning to the continental U.S. is likely to increase.

Over the past three decades, NASA has partnered with various world health organizations to use remotely sensed observations to help develop predictive models for the spread of vector-borne diseases such as Malaria, Plague, Yellow Fever, West Nile virus, Lyme disease, Rift Valley fever and onchocerciasis, or River Blindness.

This research was supported by the National Institutes of Health and NASA. Funding was also provided by the Marshall Space Flight Center Innovation Fund. The National Science Foundation sponsors the National Center for Atmospheric Research.