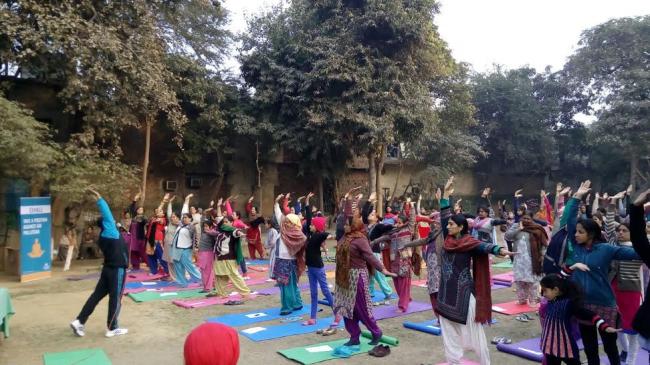 India Blooms News Service | | 08 Feb 2016, 07:29 pm
#Indraprastha Apollo Hospitals , # air pollution
New Delhi, Feb 8 (IBNS) In a bid to tackle air pollution through a common cause, Indraprastha Apollo Hospitals has launched the Exhale initiative in the city. The initiative mainstay is to involve the citizens of Delhi in its fight against pollution and to take steps to ensure a safer and cleaner city of the future.

Under the initiative, the hospital is partnering with over a 100 Resident Welfare Associations, over 1000 schools and with auto rickshaw drivers for a series of steps to help tackle air pollution.

The hospital along with the RWA’s has been working on conducting yoga and pranayama camps to ensure better lung health amongst citizens. RWA’s have been at the forefront of citizen-centric initiatives and have welcomed the Exhale program whole-heartedly.

Speaking on the need for the initiative, Praveen Shrivastava, President of Federation of RWAs, Sarita Vihar said, “We welcome this initiative from Apollo Hospitals. Air pollution is a menace that effects all Delhi-ites. We believe this campaign will be a call to action for a large section of society to come together and take meaningful action. We are confident that through a common platform that involves all stakeholders Delhi can set an example for the world.”

Fighting air pollution also needs the concerted efforts of Delhi’s young and as part of Exhale, the hospital has partnered with over 1000 schools to lead a sapling plantation drive. This initiative aims to get 25,000 samplings planted over the next two weeks to ensure Delhi’s air gets cleaner and the city ensures its future through more adequate green coverage.

CS Verma, Principal KG Sarvodaya Bal Vidyalya, Delhi said, “We need to educate our children on the ill-effects of pollution. Ensuring a clean and green environment will help tackle air pollution. Sapling plantation drive like this will also help inculcate a value system in our children that not only respects the environment but also takes the onus of ensuring its safety and well-being. We intend to use Exhale as a starting point for more such initiatives in the future.”

Their means of livelihood is also portends dangers to their health. Under the initiative, 10,000 safety masks have been distributed to auto rickshaw drivers in order to protect them from the ill effects of pollutants in the air. This step is to ensure that these vulnerable citizens are provided with basic means to tackle air pollution.

Welcoming this initiative, Ved Prakash, an auto rickshaw driver in South Delhi said, “Everyday is a challenge for us. Earlier it was the extreme weather elements that we had to endure; now air pollution is affecting our health. We thank the hospital and the project for including us in their project. We will all as a fraternity raise awareness on air pollution and take steps to minimize it in whatever way possible”.