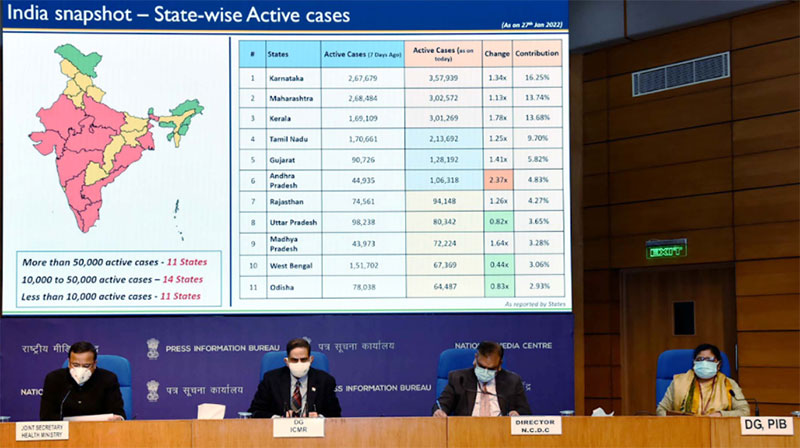 New Delhi/IBNS: Omicron is now the dominant variant of coronavirus in India and there are already indications of a plateau in the number of cases as only the top ten states are recording 77 percent of total active cases, the health ministry said today.

"Active case numbers and corresponding deaths are much lower in this wave," it said, adding that the severity of infections is also relatively lower.

Over 90 percent of the cases are in home isolation with mild to moderate severity and only a few infected people require ICU admission, the ministry said.

"There are enough vaccines available and vaccinating more people is the most important step in fighting the virus," said Dr Balram Bhargava, Director General of the Indian Council of Medical Research (ICMR).

People with comorbidities need to exercise caution and avoid large gatherings as the Omicron-linked infection's severity in such people is higher, he stressed.

A total of 551 districts are having more than five percent, which is up from 527 districts last week.

Centre's e-Sanjeevani platform for telemedicine has so far given more than 2.3 crore teleconsultation until now, it said.