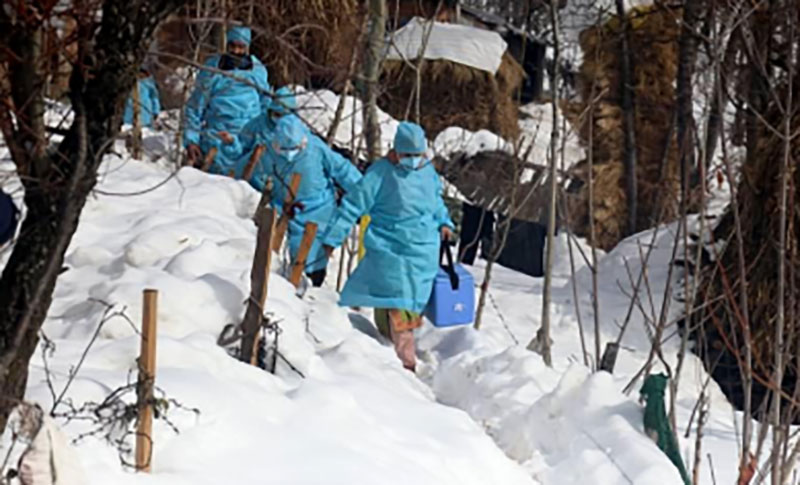 Bandipora/IBNS: After getting its name recorded as one of the first villages in the country to vaccinate the entire 18-years-old and above age group, the remote Vewan hamlet in north Kashmir's Bandipora district has zero cases of covid19.

All the eligible population stands vaccinated and sampled against the deadly coronavirus.

Motivated by the recognition after inoculating all its adult population last year, the health officials braved snowfall and harsh weather conditions to administer covid19 vaccination doses to the 15-18 year age group, officials from the medical block said.

The health teams this time were aiming for a small target of 56 children in the village for inoculation, "but the strenuous task to trek uphill in the knee-deep snow was a challenge as the weather also remained inclement", doctors monitoring the vaccination in the medical block said.

"On Tuesday five-member team, which included doctors and paramedical staff left for the inoculation drive to the cut off village and trekked some seven  kilometres in the knee-deep snow to reach the village", Wali Muhammad, a health worker with the team said.

"In three days, our medical team which had camped there vaccinated all the fifty six children in the village and completed 100 percent vaccination for the first dose," said Block Medical officer, Dr Masarat Iqbal Wani.

On Jan. 3, the Government kick-started vaccination for the 15-17 age group countrywide.

Iqbal claimed it was the first village to achieve the 100 per cent target in the country.