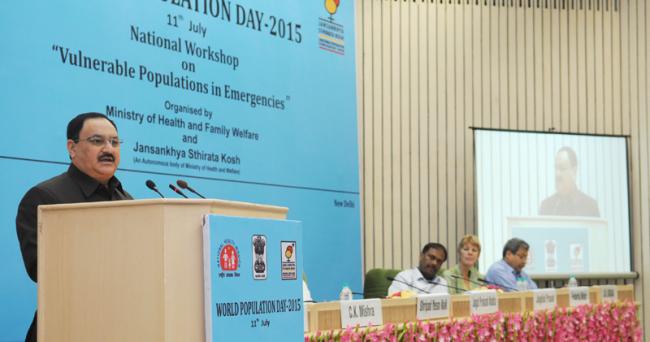 India Blooms News Service | | 11 Jul 2015, 10:17 pm
#JP Nadda, # Mission Mode, # population stabalisation, # Shripad Yesso Naik, # Health Minister
New Delhi, July 11 (IBNS): On the occasion of World Population Day, J P Nadda, Minister for Health & Family Welfare mooted the idea of taking up the task of population stabilisation in the country by adopting a Mission Mode approach, where focussed and targeted work in taken up in those states where the figures have been high.
The Health Minister stated that special efforts can be considered to stabilise population by concentrating on those states which contribute the maximum to the country total. He was speaking at the National Workshop on Vulnerable Populations In emergencies on the occasion of World Population Day at Vigyan Bhawan, here on Saturday.

The Health Minister stated that the issue of population can be seen through two lenses.

"One is to view it as an issue and the other is to consider the large proportion of the young population as an asset and harness its dividend. The country’s current population at 1.21 billion continues to pose several challenges, especially regarding delivery of affordable, accessible and quality services to the numerous people," he stated.

He, however, also applauded the fact that population has shown a decline since 2011 and the country is very close to achieving the replacement level fertility rate of 2.1 by the year 2010.

Nadda stated that the achievements of NHM towards population stabilisation have been significant, and also in terms of provisioning of health services to a large number of people.

The Health Minister added that strategies to stabilise population are critical to development for any country.

He also stated that the topic of the reproductive rights and needs of women in emergencies is contextual, and the half day long workshop with the presence of several experts in the field of healthcare will result in several thoughtful discussions and deliberations.

On the occasion, Naik stated that a large proportion of the country is vulnerable to emergencies given the geographical diversities prevailing across it. The workshop to discuss issues, especially regarding women and girls in these circumstances who are among the most vulnerable sections, will help focus attention on the strategies to address these issues, he stated.

Nadda and  Naik also participated in the Walkathon at India Gate earlier in the day.

Nadda stated that there needs to be more consciousness and awareness among the people regarding population issues and the ramifications of an increasing population.

Also present at the national workshop were senior officers of the Health Ministry along with representatives of development partners such as UNICEF, USAID, UNFPA and PFI.