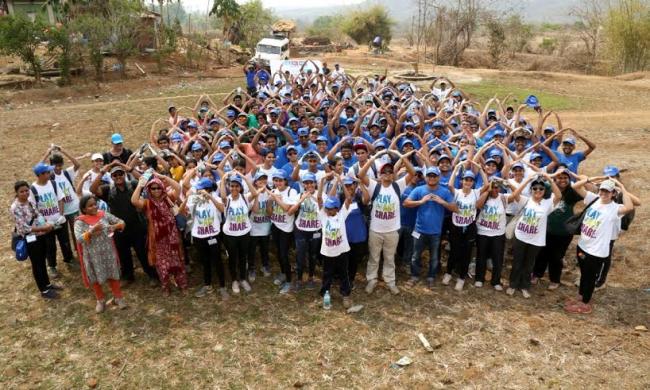 "4,35,000 people connected to support cause of Housing and Sanitation"

The three month initiative culminated in 6 locations across India namely Karwar and Geddalahalli near Bangalore, Karjat, Bawana near Delhi, Pondicherry and Chennai.  More than 2000 volunteers from all across the country travelled to the sites to build homes for the underprivileged community recently.

The NGO also launched a t-shirt design contest for college students on social media and reached out to students in 130 colleges across India. The students designed around the theme of ‘I love Home’. The activity was also taken offline where children and young students laid down their creative thoughts on paper.

The youth of the country was also reached through behavior change communication programs and modules across the country. Social media played a vital role in mobilizing more and more people to advocate the cause of housing and sanitation.

“Each year, Habitat Youth BUILD raises the bar by inspiring more supporters to get involved in raising awareness, funds and support for Habitat’s cause in exciting ways. This year is no exception. In India alone, more than four lakh people participated in one day to build decent homes and hope,” said Rick Hathaway, Vice President for Asia-Pacific - Habitat for Humanity International. He added that the campaign will serve close to six times more families this year, compared to last year.

Commenting on the India leg of the Youth Build, Rajan Samuel, Managing Director- Habitat for Humanity India, said, “We are delighted to see an immense response from the young India to build the homes for the underprivileged community. We are committed to build 100,000 homes by 2015 and this is a step towards that.”

CP Goenka was one of the 20 schools who participated the initiative and the teachers of the school where trilled with the experience.

“This enriching experience is extremely genuine, humbling and resonates with values that are important for growing children. On arrival, we were welcomed with respectful words and despite coming from vernacular backgrounds, their simplicity, discipline and culture rich persona was inspiring and motivating enough to be a part of. The initiative of Habitat for Humanity is deeply humane and has created a platform which will hopefully make changes for the better for those who are less fortunate. CP Goenka international school is proud and honoured to have been part of this endeavour and is looking forward to many opportunities,"  said the teachers of CP Goenka school.