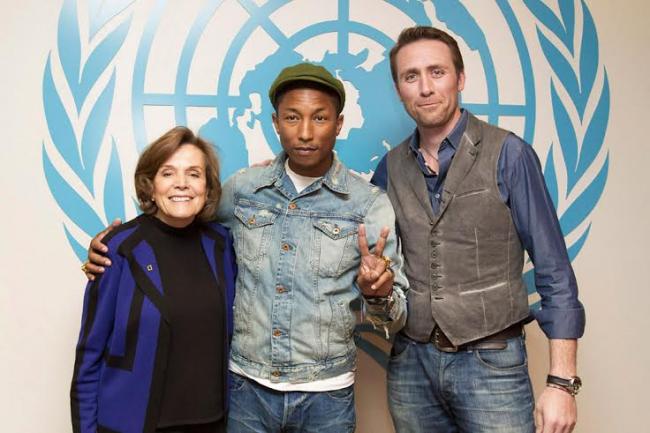 'We have to move from climate change to climate action,' Pharrell Williams says at UN event

At the event, held in the iconic General Assembly Hall in partnership with the UN Foundation, Williams also launched the world’s largest online ‘Happy Party,’ inviting everybody to log onto globalhappyparty.com and upload their own photos that will then be transformed into an animated gif to the tune of his Grammy Award-winning song, ‘Happy.’

“Happiness for the entire human family is one of the main goals of the United Nations,”Secretary-General Ban Ki-moon told the audience in a video message. “Peace, prosperity, lives of dignity for all – this is what we seek.”

Williams spoke to the children gathered, telling them that happiness is their “birthright.”

“We have to move from climate change to climate action,” he said. “We’re in trouble but we can change.”

The aim of the Happy Party is to drive supporters to sign the Live Earth Petition, rallying 1 billion people to demand world leaders commit to tackling climate change at the summit to be held in Paris in December and make climate action a global priority.

The voices of Philippe Cousteau and Sylvia Earle, who also spoke, amplified Williams’s message. Cousteau showed films about his conservation work and Earle urged the audience to take advantage of the knowledge available to them in the modern world.

“Individually, one of the things that kids can do, [is say] I am going to think happy thoughts, [and] do what I can do to make the world a happier, better place,” she said. “We have come along at maybe the most important time in all of history. Never before have we known what now is known about the planet.”