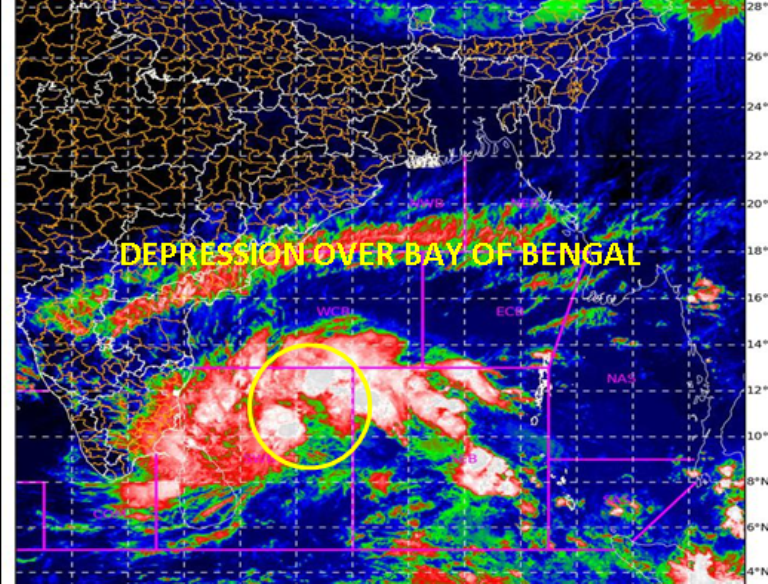 Depression in Bay of Bengal to intensify into cyclonic storm 'Nivar' along Odisha coast: Met Dept

Bhubaneswar/UNI The Well Marked low-pressure area formed over Southwest adjoining the southeast Bay of Bengal concentrated into a depression on Tuesday.

Met sources said the depression is very likely to intensify into a cyclonic storm 'Nivar' during next 24 hours and will move north-westwards and cross Tamil Nadu & Puducherry coasts between Karaikal and Mamallapuram around Nov 25 as a severe cyclonic storm with a wind speed of 100-110 kmph gusting up to 120 kmph.

D over SW and adjoining SE BOB moved WNWwards lay centred over the same region at 1130 hrs IST of today.Very likely to intensify into a CS during next 24 hours and cross Tamil Nadu and Puducherry coasts between Karaikal and Mamallapuram around 25th November 2020 afternoon as SCS pic.twitter.com/t5PHCauCYj

Under its impact light to moderate rain or thundershower is likely to occur at a few places over the districts of Malkangiri, Rayagada, Gajapati, Koraput, Ganjam, Kandhamal and at isolated places over rest districts of south Odisha on Nov 25.

Rain will also occur over the districts of Malkangiri, Rayagada, Gajapati, Koraput, Ganjam, Nabarangpur and at a few places over rest districts of south Odisha on Nov 26 next.

Heavy rainfall is very likely to occur at isolated places over the districts of Malkangiri, Koraput, Rayagada, and Gajapati.

Fishermen are advised not to venture into deep sea areas of southwest & adjoining west-central.

Meanwhile, keeping in view of the cyclone Nivar, the Railways have decided to cancel three trains East Coast Railway (ECoR) sources here said the 02898 Bhubaneswar-Pondicherry Special from Bhubaneswar on Nov 24 will run up to Chennai Egmore and will remain cancelled from Chennai Egmore to Pondicherry.