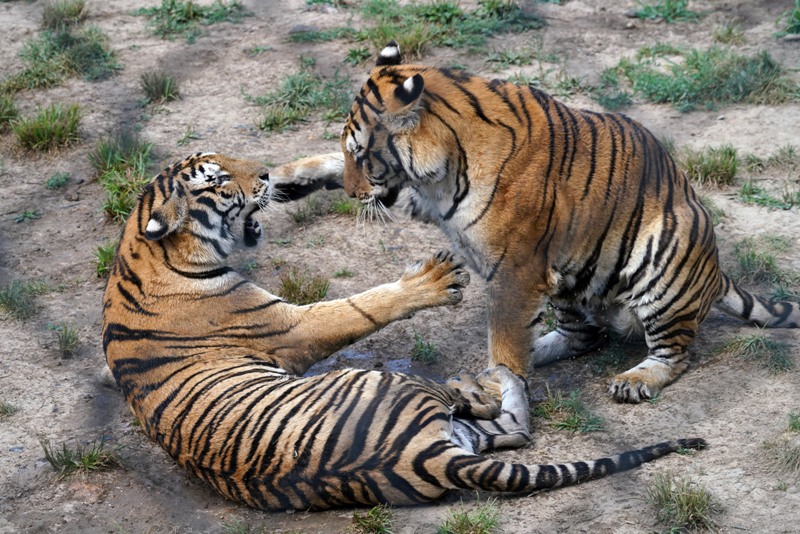 In Asia, there are problems with captive tigers in countries like Thailand, China and Vietnam. Although there are tigers in captivity in Indian zoos, no close contact with visitors is allowed.

In February 2017, World Animal Protection drew the attention of the authorities to a proposal to create a tiger petting zoo in Kolkata.

"With more than one million Indian tourists visiting Thailand every year, and wildlife entertainment venues remaining a popular destination for them: the people of India are in a position to make a significant difference for tigers, by not supporting the cruel industry. Tiger tourism starts young cubs being separated from their mother two or three weeks after they are born. Trade of wild animals must end immediately. Wild animals belong in the wild. That's why we are asking G20 nations to end wildlife trade forever," said Gajender K Sharma, Country Director, World Animal Protection India.

World Animal Protection calls on the people of India to be responsible tourists, and not visit tiger entertainment venues or take tiger selfies.

"Wild animals belong in the wild. They must remain in their natural habitat. In India, World Animal Protection is urging Prime Minister, Narendra Modi to support the global call for wildlife trade ban when he represents the country at the G20 summit. We also ask the Government of India to effectively enforce existing wildlife protection laws and stop the trade of wild animals and wild animal products," the Organisation said in an official release.

World Animal Protection has also requested World Health Organisation to permanently ban all wildlife markets around the globe in the wake of coronavirus pandemic and to take a highly precautionary approach to the wildlife trade.

In 2016, World Animal Protection exposed the true scale of abuse that captive tigers were enduring at the hands of Thailand’s tiger tourism industry. Launched ahead of the International Tiger Day on 29 July, 2016, the report "Tiger selfies exposed: A portrait of Thailand’s tiger entertainment industry" highlights the hidden cruelty and suffering in tiger entertainment venues across Thailand.

The report revealed a rapidly expanding industry, with a third more captive tigers (33%) in Thailand in the past five years. The growing numbers of tigers indicates ‘speed-breeding’ of captive tigers without any conservation benefits and means more tigers are born into suffering. As of 2019, it is estimated there are approximately 1570 tigers in Thailand.

The main welfare concerns witnessed by the investigators at these tourist venues were:

• Tiger cubs who are separated from their mothers, two to three weeks after they are born
• Young cubs being presented to tourists, constantly viewed and mishandled hundreds of times a day, which can lead to stress and injury
• Tigers being punished using pain and fear in order to stop aggressive unwanted behaviour.
• Most tigers were housed in small concrete cages or barren enclosures with limited access to fresh water.
• One in ten of the tigers that were observed showed behavioural problems; such as repetitive pacing and biting their tails. Such behaviours most commonly occur when animals feel they cannot cope with stressful environments or situations.

Of the 17 tiger entertainment venues investigated in Thailand, Sriracha Tiger Zoo in Pattaya had the highest number of tigers in captivity. It is also the venue where the poorest animal welfare conditions were observed – with at least one tiger so thin its hips and ribs were visible.

World Animal Protection continues to press for proposing an amendment to the existing law -- Wild Animal Reservation and Protection Act, B.E. 2562 -- which would put a ban on captive tiger breeding. The current stage is that our organization has already submitted the draft amendment to the Thai parliament, then 10,000 supporter's signatures will be delivered to them today on World Tiger Day.

Whether travelling abroad or in India, World Animal Protection urges people to treat India’s national animal with respect and compassion.