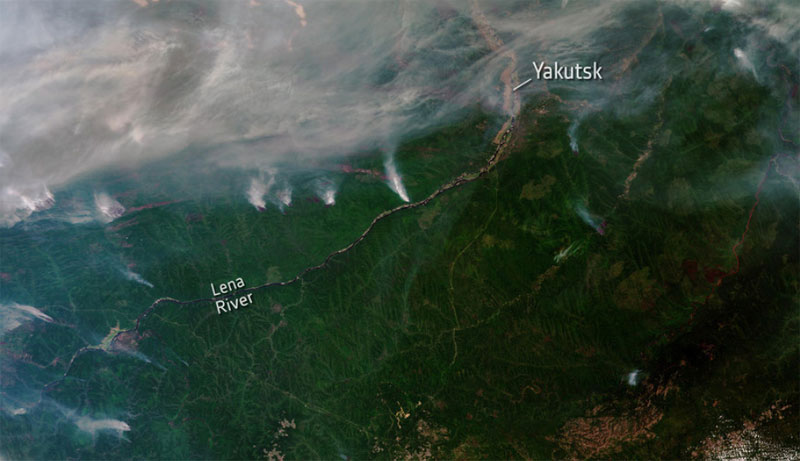 “Exceptional and prolonged” temperatures in Siberia, have left parts of the Arctic warmer than sub-tropical Florida, and fuelled “devastating” wildfires for a second consecutive year, the World Meteorological Organization (WMO) said on Friday, while warning also of rapidly decreasing sea ice along the Russian polar coast.

According to the UN agency, temperatures in Siberia have been more than 5C above average from January to June, and in June up to 10C above average.

“Some parts of Siberia this week have again topped 30 degrees Celsius – so it’s been warmer in Siberia than…many parts of Florida”, said WMO spokesperson Clare Nullis at a press conference in Geneva.

“We’ve had exceptional and prolonged heat for months now and this has fuelled devastating Arctic fires; and at the same time we’re seeing rapidly decreasing sea coverage along the Arctic coast”, she continued, noting that their estimated total carbon emissions since January are the highest in 18 years, when the Copernicus Atmosphere Monitoring Service of wildfires began.

The development follows an astonishing reading of 38°C in the Russian town of Verkhoyansk on 20 June.

This has been confirmed by the Russian Federal Service for Hydrometeorological and Environmental Monitoring (Roshydromet); WMO is in the process of establishing a committee to assess that decision.

The cause of the prolonged furnace-like conditions, is the “blocking” action of a vast weather front over the Arctic, along with a “persistent northward swing of the jet stream” which has been sending warm air into the region, journalists heard.

“The Arctic is heating more than twice as fast as the global average, impacting local populations and ecosystems and with global repercussions”, Ms. Nullis said, adding that such extreme heat would have been almost impossible without the influence of human-induced climate change.

Worrying footage of the forest fires close to the ocean have underscored the need for urgent climate action by nations and greater commitment to achieving the pledges made in the Paris Climate Agreement, the WMO spokesperson insisted, including efforts to limit global warming to 1.5C above pre-industrial levels.

Data from Wednesday showed 188 probable points of fire in Siberia, according to Roshydromet, with blazes particularly intense in Russia’s Sakha Republic and Chukotka Autonomous Okrug, in the far northeast of Siberia.

Both areas have experienced much warmer conditions than usual in past months. Russian authorities have also declared that there is an extreme fire hazard throughout the Khanty-Mansiysk Autonomous Okrug – Yugra which is in western Siberia, WMO reported.

Wildfire smoke contains pollutants including carbon monoxide, nitrogen oxide, volatile organic compounds and solid aerosol particles, the UN agency said in a statement, which noted that Arctic wildfires emitted the equivalent of 56 megatonnes of carbon dioxide in June, compared to 53 megatonnes in June 2019.

“We’re seeing, you know, dramatic satellite images, which show the extent of the burns surface; the fire front of the northern-most currently active Arctic wildfire is less than eight kilometres from the Arctic ocean – this should not be happening,” Ms. Nullis said.

Land surface temperatures in Siberia in June 2020 were hotter than average for the same period from 2003-2018. , by NASA Earth Observatory

Highlighting new climate research published in the journal Nature Climate Change pointing to irreversible threats to the Arctic ecosystem, the WMO spokesperson said that “polar bears - which as we all know is a symbol of climate change - could be nearly extinct by the end of the century”, if sea ice continues to shrink at current rates.

Accelerating ice retreat along the Arctic Russian coast in the spring, has accelerated since late June, leading to very low sea ice extent in the Laptev and Barents Seas, WMO also warned.

“The Northern Sea route appears to be nearly open”. it added.

Changes to weather at the poles will likely affect other more distant and populated places too, Ms. Nullis cautioned, thanks to a phenomenon known as “teleconnections”.

These are observed in weather events including El Nino, where cold and dry air reaches places that are more used to seeing warmer, wetter conditions.

“In general, the Arctic is heating more than twice the global average”, Ms. Nullis said. “It’s having a big impact on local populations and ecosystems, but we always say that what happens in the Arctic doesn’t stay in the Arctic, it does affect our weather in different parts of the world where hundreds of millions of people live.”