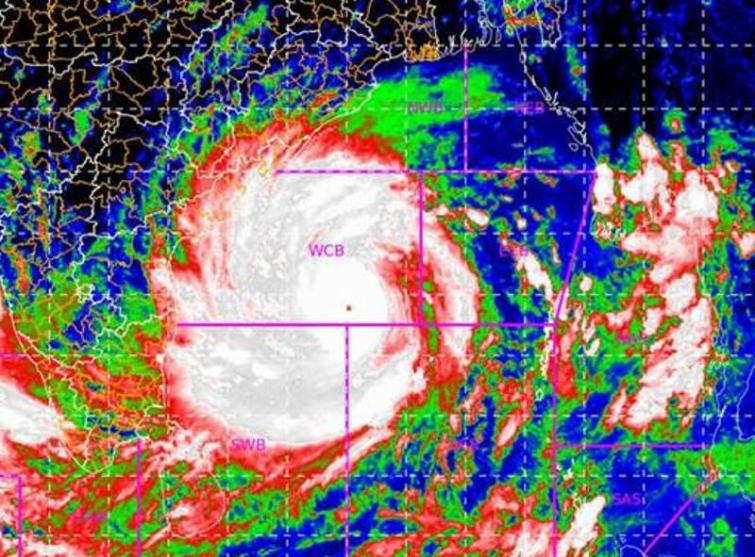 Digha (East Midnapore)/UNI: A silent, sombre frothy Digha awaits with a palpitated heart the unwelcome lashing of Cyclone Amphan on the seashore.

According to met officials, the cyclone's speed could touch between 165 and 175km/h in the next 24hours.

The severe cyclonic storm has a devastating capacity of large scale destruction of the coastal areas of the district, authorities are worried here.

All Flood Centres have been visited by officials.

Every block in the region has been alerted.

The National Crisis Management Committee (NCMC) under the chairmanship of Cabinet Secretary Rajiv Gauba met for the second time has reviewed the preparedness of States and Central Ministries/Agencies to deal with the Super Cyclonic Storm.

The India Meteorological Department (IMD) has informed that the Super Cyclone is expected to reach the West Bengal coast in the afternoon/evening of 20th May with wind speeds ranging up to 155-165 kmph gusting to 185 kmph, causing heavy rainfall, accompanied by squally winds and storm surges, in the coastal districts of the State.

The storm is likely to impact the coastal districts of Jagatsinghpur, Kendrapada, Bhadrak, Jajpur and Balasore in Odisha and East Medinipur, South & North 24 Parganas, Howrah, Hooghly, and Kolkata in West Bengal.

Officers of concerned State Governments apprised the NCMC of preparatory measures taken by them. They also assured that adequate stocks of food grains, drinking water and other essential supplies and services were available with them.

NDRF has deployed 26 teams in Odisha and West Bengal and additionally teams are enroute to these States. The teams are equipped with boats, tree cutters, telecom equipment etc. Rescue and relief teams of the Army and Navy alongwith ships and aircrafts of the Navy, Air Force and Coast Guard have been put on standby.

Reviewing the preparedness of the States and Central Agencies, Cabinet Secretary directed that all necessary measures be taken to complete evacuation of people from low lying areas in cyclone path and maintain adequate quantities of essential supplies such as food, drinking water and medicines etc. Agencies were directed to prevent disruptions to Power and Telecommunications services. Free facility of targeted SMSs to warn the people of the cyclone and intra circle roaming is to be provided.

NCMC will meet again tomorrow to take stock of the emerging situation.