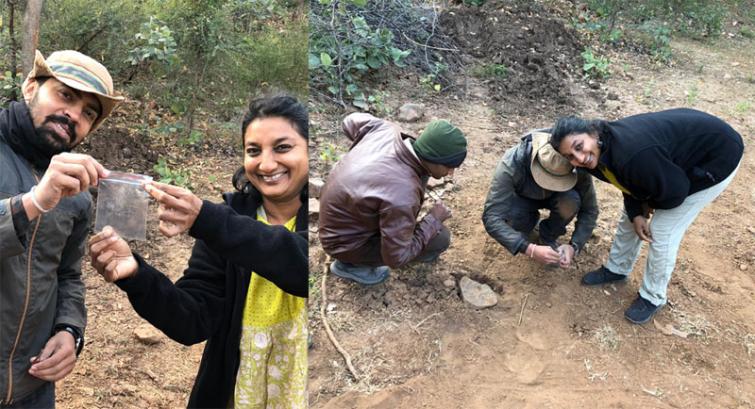 Preserving the tiger population in the Indian subcontinent is a passion with Uma Ramakrishnan, an assistant professor at the National Centre for Biological Sciences (NCBS), Bengaluru, and one of India’s leading scientists. Her work focuses on population genetics and the evolutionary history of mammals..

Data from Ramakrishnan’s work has been used for creating and improving plans for conservation of tigers in a rapidly-urbanising India. In 2013, Ramakrishnan and her team’s data was used as evidence in the Supreme Court to petition for an underpass for the widened National Highway 7, to enable tiger connectivity between Kanha and Pench tiger reserves in Madhya Pradesh.

Ramakrishnan was a 2015-2016 Fulbright-Nehru Academic and Professional Excellence Fellow at Stanford University, California. She is the first Indian to win the Parker/Gentry Award, administered by The Field Museum in Chicago in recognition of her work on conservation efforts.

I was always interested in the natural world and in understanding animal behaviour. I was lucky to grow up on the Indian Institute of Science campus in Bengaluru. My curiosity as a child always extended beyond simply observing the natural world. I asked myself: Why do animals behave the way they do? What is actually transpiring in these animal populations? Early on, I realised that there was a hidden layer of information that we were not considering—DNA and genetic variation.

After high school, I accompanied my family to Princeton University, USA, where my father was on a sabbatical. There I spent time in a molecular ecology lab and could gain deep insights into biology by understanding this hidden information layer. I knew then that I wanted to use a genetics lens to study wildlife populations.

After my studies, I was lucky to get a job at the National Centre for Biological Sciences, part of the Tata Institute of Fundamental Research, Bengaluru. I was their first hire in the ecology and evolution area. Soon after, I got a call from conservation zoologist and tiger expert Ullas Karanth, asking if I was interested in working on tigers and their genetics. My journey over the last 15 years or so at NCBS, understanding tigers and other Indian biodiversity, has been incredibly exciting.

How is your work helping to preserve the tiger population in India?

The future of tigers is really in our hands. Thanks to the efforts of the Government of India, several tiger populations have recovered. The viability and future survival of these populations will be contingent on our ability to maintain connectivity between them.

I hope our research has and will continue to fill the gap between science, management and policy. We are currently working on an isolated population of tigers in Rajasthan, and I hope our research insights will help plan what may be the best way to ensure long-term survival of this population.

How has your experience at the Stanford University as a Fulbright Fellow helped your current work in India?

This was a really great opportunity. After nine years at NCBS a sabbatical sounded great. I was outside my comfort zone at Stanford University, the academic mecca for population genetics. Additionally, Stanford is nestled in the San Francisco Bay Area, where many conservation NGOs and start-up companies at the forefront of new genomic technologies are based.

The amazing thing about being outside your comfort zone is that it’s empowering. With colleagues at Stanford, we turned what has typically been a challenge for conservation genetics—non-invasive or poor-quality DNA samples—into  a strength. We asked whether we could develop cheap, reliable and fast methods that used novel genomic technologies to work on poor-quality samples.

While there, my colleagues and I set up the Program for Conservation Genomics. Our goal was to provide simple-to-use genetic approaches to on-ground conservationists. We are still working together to make this a reality.

What are some of the biggest challenges in your work?

Permissions to work in protected areas are always very challenging. Then, there are the things you really have no influence over. It rains and, well, your samples collected over the next few days are unlikely to have DNA or yield results. Sometimes, we work with large teams or in areas which are very difficult (for example, high elevation), inaccessible or not very politically stable.

What are your future research plans?

I would really like to build partnerships with other tiger researchers across Asia. The methods we developed while at Stanford are going to be generalizable across tiger range countries. One of the goals is that everyone across the world can use a common platform for analyses, so that the data is comparable. Critical to this effort, however, is that each country builds an ecosystem to generate and analyze their genetic data on tigers locally.

We are working hard to understand the impacts of inbreeding or mating between relatives on small and isolated tiger populations. This is a big ask for a species like tiger, but I am hoping the detailed work we are doing could shed some light on this problem, which is sure to become more common with time.

I hope that our research can contribute in whatever small way to reverse biodiversity loss.