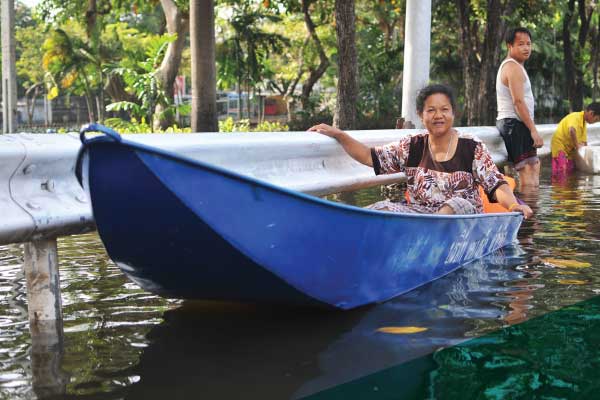 Hosted by the World Meteorological Organization (WMO), the Conference on Gender Dimensions of Weather and Climate Services, which takes place from 5 to 7 November 2014, hopes to produce concrete actions to empower women to produce and use weather and climate services.

Women, especially in developing countries, are often more exposed to the risks of extreme weather because they can be less mobile than men, lack access to traditional means of communication, and are more vulnerable to associated risks such as under-nutrition and water-borne diseases, according to the WMO.

For instance, in the 1991 cyclone disasters that killed 140,000 people in Bangladesh, 90 per cent of victims were women. Explanations for this include the fact that more women than men are homebound, looking after children and property. In May 2008, Cyclone Nargis came ashore in Myanmar. Among the 130,000 people dead or missing in the aftermath, 61 per cent were female.

“We have made great progress in improving weather forecasts and climate services such seasonal outlooks to help protect lives and livelihoods,” said the head of the WMO Secretary-General Michel Jarraud in a press release.

“But if we are to help communities cope with long-term climate change and the anticipated increase in hazards like floods and heat-waves, then we need to do more to reach out to women with gender-sensitive services,” he added.

“We have the opportunity and the responsibility to bring women’s voices to the fore of climate change solutions...Women with the knowledge we hold and the ability to get things done are a valuable resource but traditionally under-utilized,” said Ms. Figueres ahead of the meeting.

Hence, it is important to empower women to be included in designing services that meet their needs and encourage women to get involved in science related careers. As a global average, only one-third of professionals in meteorology and hydrology are women.

During the conference, a high-level panel on Women and Careers in Weather, Water and Climate will examine how to attract and promote more female scientists. “There is a need to encourage and create a conducive environment for young girls who have vision of being great future scientists to realize their vision," said Dr. Agnes Kijazi, Director-General of the National Meteorological Service of Tanzania, a conference co-sponsor.

Conference outcomes will feed into the post-2015 development agenda, the disaster risk reduction future framework, and other future climate action, and Beijing+20 platform on gender equality.


The impact of disasters is different for women and men due to social constructs. Empowering women builds important capacities for disaster response and climate resilience. Photo: WMO