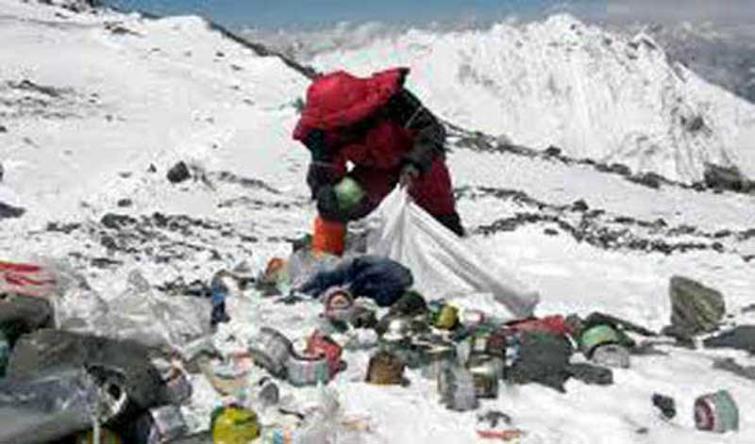 Kathmandu, May 28 (UNI) The Nepal Government has concluded its clean-up drive of the Mount Everest and said it had collected nearly 11 tonnes of trash that had piled up on the peak for decades.

The media reports here said the clean-up initiative, the first of its kind since Edmund Hillary and Tenzing Norgay Sherpa conquered the summit 66 years ago, was launched in mid-April and involved a team of 12 high-altitude Sherpa climbers who spent over a month collecting the waste.

Various stakeholders, including the Tourism Ministry, the Nepali Army, the Nepal Mountaineering Association, the Nepal Tourism Board, the Sagarmatha National Park, the SPCC and the local government have joined hands for this clean-up campaign.

"Along with the rubbish, they also collected four dead bodies from the high camps of Mount Everest that were brought to Kathmandu last week," Dandu Raj Ghimire, the Director-General of Nepal's Tourism Department, told EFE News.

He added that China had also launched a similar drive to clean the north side of the world's highest mountain.

"There are big environmental concerns and criticism from the international community that Nepal has not shown seriousness to maintain the beauty of the iconic peak," he added, while vowing that the government would continue to clear the human residues left on Mount Everest.

Ang Dorje Sherpa, the Chairman of the Sagarmatha Pollution Control Committee (SPCC), said around seven tonnes of waste had been collected from the Everest Base Camp and the high camps.

The other four tonnes were removed from the villages of Lukla and Namche Bazar, both of which are considered the gateway to Everest.

#TheCube | The summit of the world's highest peak experiences severe 'traffic' in times of optimal weather conditions, sparking fear for the safety of adventure enthusiasts with hour-long queues to the summit.

Hundreds of foreign mountaineers spend thousands of dollars to conquer the peak every spring season, which normally begins in early April and lasts until May. As they go on the dangerous climb, they leave behind a trail of litter.

In recent times, Everest has often earned the moniker of the world's highest garbage dump.

The government collects more than $3.55 million per year in revenue by issuing permits for climbers, but little had been spent so far to keep the ecosystem clean.

In 2014, the government introduced a rule forcing each member of an expedition to bring back at least 8 kg of collected garbage, in addition to the trash they generate themselves.

Each expedition team has to deposit $4,000, which are refunded if each climber returns with the 8 kg of waste.

The deposit is refunded only if the SPCC certifies that they have taken all their trash back down. But many commercial expeditions still end up leaving trash scattered among the gelid snow.