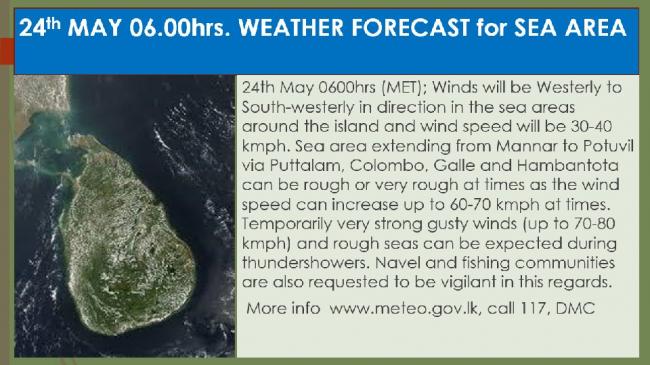 Colombo, May 24 (IBNS): With over 68,000 families affected by the prevailing heavy monsoon rains in Sri Lanka, the government has called the tri-forces to rescue and evacuate people trapped in the flood and landslide-hit areas.

Spokesman of the Sri Lanka Navy (SLN) Dinesh Bandara said that 38 SLN teams were deployed in eight districts to handle the rescue and relief operations.

“We have rescued over 172 people including nine pregnant mothers, marooned by floods. Over 100 navy personnel have been deployed for rescue and relief operations while some teams of navy personnel from the Special Boat Squadron are deployed to clear blocked drains and bridges. We have also deployed the SLN diving teams in some of the flood hit areas,” he said.

The troops have also rescued 28 differently-abled children and their teachers trapped in a vocational training centre.

Army Commander Mahesh Senanayake has instructed his top army officials to support the local government authorities in the affected areas to handle rescue operations and to deploy necessary troops in evacuation.

“Over 100 soldiers are engaged in rescue missions in the flood and landslide hit areas. The three- wheeled armored personnel carriers and fleet of boats are kept standby to deploy in an emergency,” Army Spokesman Brigadier Sumith Attapattu said.

The Air Force Spokesman Gihan Seneviratne said an aircraft and Air Force rescue teams were ready to be deployed in rescue and relief operations if the weather situation gets aggravated.

Meanwhile, the Disaster Management Centre has predicted more heavy rains in the next two days and issued ‘red alerts’ for 14 districts in the country.

Nine people have died and 124,000 people have been affected due to widespread heavy rains and floods .