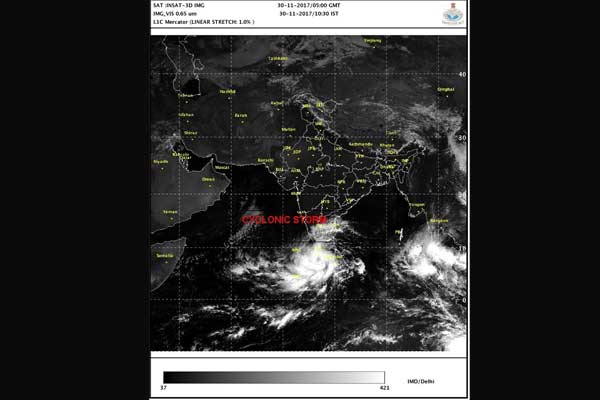 New Delhi, Nov 30 (IBNS): Heavy rain lashed southern and central parts of Kerala on Thursday, an outcome of Cyclonic Storm ‘OCKHI’, which lay over Comorin area of the southern peninsula, according to media reports.

The Ministry of Earth Sciences said in a mid-day release that latest observations and satellite imageries indicate that the deep depression over Comorin area moved west-northwestwards with a speed of 38 kmph during past six hours and intensified into a cyclonic storm ‘OCKHI’ and lay centred at 0830 hrs IST on Thursday over Comorin area and neighbourhood near Latitude 7.5º N and Longitude 77.5º E, about 340 km west-northwest of Galle (Sri Lanka), 60 km south of Kanyakumari, 120 km southwest of Thiruvananthapuram and 480 km east-southeast of Minicoy.

The system is very likely to move west-northwestwards towards Lakshadweep Islands and intensify further into a severe cyclonic storm during next 24 hours, the release said.

The ministry has issued a series of warnings on Thursday. Excerpts:

Rainfall at most places with heavy to very heavy rainfall at a few places and isolated extremely heavy falls very likely over Lakshadweep area during next 48 hours.

Squally winds speed reaching 55-65 kmph gusting to 75 kmph very likely along & around Lakshadweep Islands during next 12 hours and increase thereafter with wind speeds becoming 80-90 kmph gusting to 100 kmph from tonight, the 30th November 2017.

Sea conditions would be very rough to high over and around Lakshadweep Islands during next 12 hours and high to very high during subsequent 48 hours.