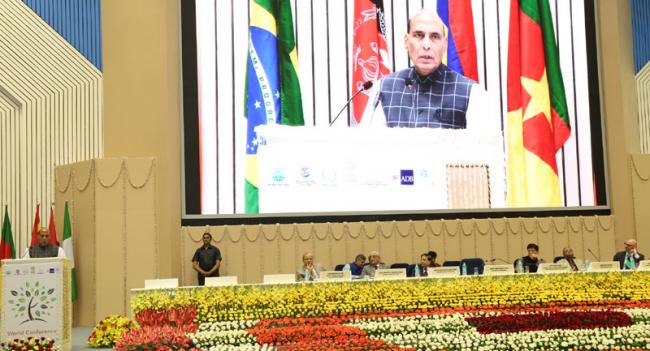 "The crisis facing the humanity today has forced us to review the whole gamut of Man–Nature relationship, more precisely in the light of the developments of the last five decades and accordingly chalk out the future course of development," Singh said.

"The people of India have always believed in the umbilical relationship with Nature and we regard her as Mother Nature. We can't exist without Nature," he said.

Singh said Nature should not be exploited but nurtured for the wellbeing of the human kind.

He said: "When Nature is in equilibrium, our lives and the world we live in will be in balance."

Speaking on the issue of climate change, he said :"Pollution and Climate change are adversely influencing our present and they are also going to have a serious impact on our future. It has been observed that if current consumption and production patterns remain the same and population reaches 9.6 billion by 2050, then, we will need three planets to sustain our ways of living and consumption."

He said climate change has been recognised as a major global challenge.

"We are deeply concerned about the rising oceans as our planet is melting at both the ends.  Arctic and Antarctica have hit record low ice extents this year and melting poles are threat to our coastlines. We in India are also worried about the retreat of glaciers in Himalayas that feed our rivers and nurture our civilisation," he said.

Singh made the remarks as he attended the ‘World Environment Conference’, organized by the National Green Tribunal here.