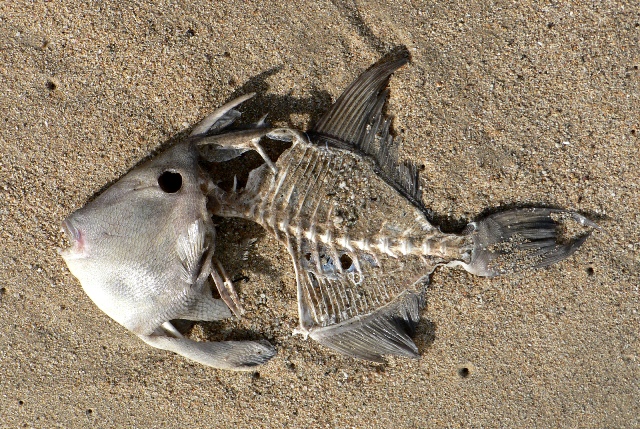 Tests by the Department of Fisheries and Oceans (DFO) and by Federal scientists for dissolved oxygen, salinity, temperature, disease, parasites or toxins were found to be negative and failed to determine factors that were fatal to the sea life, CBC News reports said.

The examination of physical environment, consultation of recent environmental data and scanned images of the bottom of St. Marys Bay off the Bay of Fundy showed all conditions of the water and environment were normal.

"We have ruled out the usual suspects," said Kent Smedbol, manager of population ecology for DFO.

The only solution they could think of was a sudden drop in temperature, down to –5 C, in the shallow areas around Digby caused by a recent winter storm.

Derreck Parsons, a senior compliance program officer for DFO, said irrespective of the reasons, there was no evidence of any more dying fish and the situation is not worsening.

Parsons said the majority of dead fish have been found in St. Marys Bay between the Sissiboo River and Plympton.

"There was nothing outstanding about the herring. No physical trauma, no sign of widespread disease," said Smedbol.

"Nothing really that would stand out to be honest."

Smedbol also confirmed that the work by the Canadian Food Inspection Agency, and Environment and Climate Change Canada to look for contaminants and by the fish health lab in Moncton had been negative.

The fishery officials also could not determine if the death of the whale was related to the death of other sea creatures that were washed on the shore.

Andrew Reid, response coordinator for the Marine Animal Response Society in Nova Scotia said a close examination would be needed to determine the cause of death of the decomposed whale to link its death to the deaths of the other sea creatures that had washed up on the sea shore.

He said reason for the death of other sea creatures was a prerequisite to find the similar circumstances and cause of death in the whale.

So far all the tests were negative.

"Based on the testing that we've done to date, we haven't determined any indications of infections or infectious agents," said Doug Wentzell, regional director general for the Department of Fisheries and Oceans, Global News reports said.

As far as dead fish species and herring were concerned Smedbol also ruled out the tidal turbine that came online in November to be responsible for two reasons.

Smedbol argued that if the turbine was responsible for the deaths, dead animals on more beaches in the area would be seen by scientists.

Secondly, more fish species other than herring could be affected,.

The problem of methane leaks causing a drop in oxygen was also ruled out by Smedbol because no other species other than herring were being washed up.

Provincial veterinarians were carefully watching farmed fish in the area, with the most recent visit last week, Nova Scotia's Department of Fisheries and Aquaculture said.

Heather Fairbairn, a spokeswoman for the department said they could not find any evidence of farmed fish affected by the washed up herring.

The Municipality of the District of Digby said the fish was not found in any of the municipal sewer or water systems in the area.

Regarding the dead whale, Wentzell and Smedbol had carefully examined photos of the dead whale and found that the whale’s interior organs and tissues showed signs of advanced decomposition which indicated that it had been dead for quite some times.

Reid said it would be difficult to determine when the whale died.

Determining the cause of death for an animal like the humpback  is a fairly labour-intensive process and requires complete necroy, said Reid.

Smedbol said that it was common to have large whales, particularly baleen whales, wash up on the beaches or be found dead floating in the Bay of Fundy, Smedbol said.

The department hasn't decided whether a necropsy on the decomposed whale would provide any useful information.

There were only a few people in North America who had the expertise to perform the procedure on a large whale, said Smedbol.

"If it was blunt force trauma, we would probably be able to determine that.

But if it was an illness or toxins... it would be very difficult to draw definitive conclusions on those causes of death," said Smedbol. "So the department will have to weigh the options."

Smedbol said depending on the results of the water sampling, DFO would start monitoring the area.

But till then to link the death of fish kill with the dead whale would not be reasonable, he said.

Smedbol said if the habitat on the ocean floor is found to be in good health, officials would likely rule out any local environmental issue, and it would rule out any link of whale death to the fish kill.

But if the fatal conditions in the sub-tidal area is revealed by the sampling, then the link between the whale death and other fish kill would become obvious, he said.

Results should be available in a few days, media reports said.

Public had been warned by The Canadian Food Inspection Agency not to consume the dead fish.