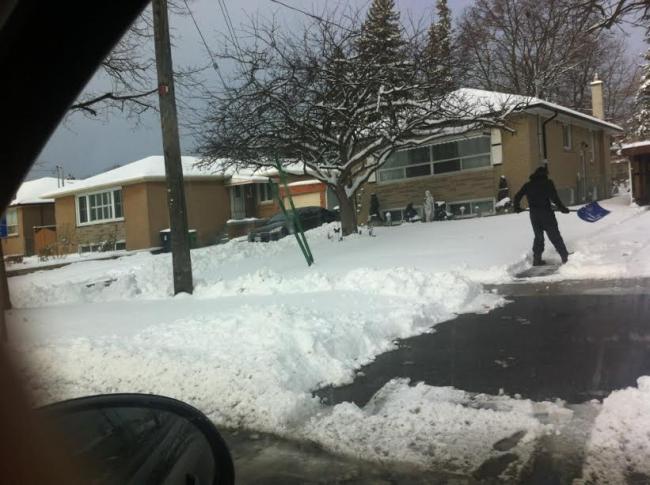 Toronto: Cancellation of flights, shutting down of universities, over 500 collisions caused by heavy snow

India Blooms News Service | | 16 Dec 2016, 10:47 pm
#Tonronto, #Toronto snow, #Toronto flight cancellation
Toronto, Dec 16 (IBNS): The city of Toronto was in a grip of mix of rain, snow and freezing rain which began Thursday around 3pm, causing the cancellation of at least 60 flights, about 46 delays, and at least a dozen more to board late into the evening.

At Billy Bishop City Centre Airport on Toronto Island, at least seven flights had been cancelled, while another 15 have been delayed since 3 p.m.

Air Canada had informed that affected passengers could rebook their flights without penalty, provided there were available spaces.

Toronto and much of southern Ontario Thursday had been warned by Environment Canada of winter travel advisory as five-to-10 centimetres of snow began falling in the mid-afternoon resulting in the whiteout conditions on roads and highways across the Greater Toronto Area (GTA).

Drivers were cautioned to drive slowly as seven rush-hour collisions were reported by 5:30 p.m. in the city alone.

The TTC suspended trains on the Scarborough Rapid Transit line at 5:50 p.m. because of the disruption of signal services caused by cold.

Shuttle buses were arranged to run between Kennedy and McCowan stations.

Thursday night exams were cancelled by York University and Humber College, but as of 5 p.m. Ryerson University said it would be open for the time being.

In the meantime some students who were stuck in the traffic were concerned about their grades being at risk and were making the call.

On Friday another five to 10 centimetres of snow could fall starting at night after 7 p.m. to be continued into Saturday, reported Environment Canada’s special weather statement for the GTA.

Cancellation of about 80 flights in and out of Pearson International Airport have been reported Friday morning following dozens of cancellations on Thursday.

A snowfall warning is in effect for parts of southern Ontario, including Barrie, where 15 to 20 centimetres could fall.

The snow will change to rain on Saturday changing to a short period of milder weather.

But it will change back to snow on Saturday night when the temperature drops again and driving conditions could be poor during the storm, said the agency.

Over 500 collisions have been reported by the police since 6am today in the GTA and surrounding areas.

Meanwhile, Toronto remained under an issued on Wednesday.

Two cold weather drop-in centres in Toronto will remain open 24 hours a day until noon on the day the alert ends.

(Reporting and photographs by Asha Bajaj )