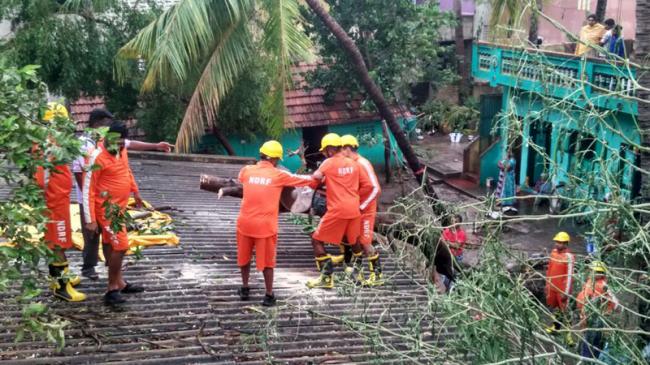 "In Andhra Pradesh, 08 flood rescue teams of NDRF were prepositioned in coastal areas viz. Ongole, district- Prakasam (01 team), Vishakhapatnam (01 team), Chittoor (02 teams) and Nellore (04 teams). Immediately after the landfall, NDRF teams started clearing the road by removing uprooted and fallen trees to establish normalcy in the affected areas. The teams in these areas have cleared all the major roads," read the government statement.

"In Tamil Nadu, 10 flood rescue teams of NDRF have been deployed in various low lying areas. 02 teams are at Kanchipuram, 03 teams are at Tiruvallur and 05 teams are at Chennai. 01 team is at Puducherry," it said.

The moment landfall took place, the teams began tree clearing operation as several trees had fallen due to the severe wind of high speed of 110-120 KMPH.

The NDRF teams carried out the operation throughout night and have cleared the main roads of all the major places in Chennai.

In addition, yesterday, NDRF team rescued 2 victims and recovered 2 bodies from a car which met with an accident in Mahabalipuram during the cyclone.

DG, NDRF is closely monitoring the situation round the clock. NDRF Control Room in Delhi is in touch with IMD and local state administration.