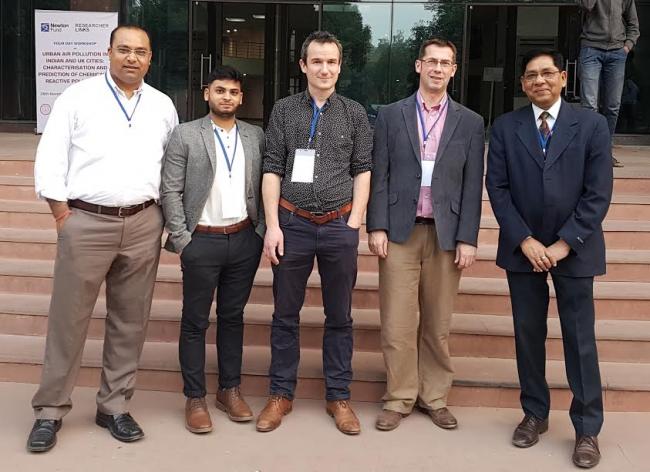 India Blooms News Service | | 02 Dec 2016, 05:05 pm
#Birmingham , # Indian scientists , #pollution
London, Dec 2 (IBNS): Scientists at the University of Birmingham are in Delhi and working with their Indian counterparts to help young researchers better understand the causes, sources and effects of pollution in India and the UK.

Dr Francis Pope, at Birmingham and Professor Mukesh Khare at the Indian Institute of Technology (IIT) are this week working with a group of Early Career Researchers from both countries at a four-day workshop in the city to investigate air pollution.

Sponsored by the British Council as part of the Newton Fund Programme, the workshop follows work at Birmingham, which discovered a sharp reduction in visibility caused by fireworks events marking occasions such as Diwali and Guy Fawkes’ night. Birmingham scientists found that visibility was further decreased when the relative humidity was high.

Dr Pope, from the University’s School of Geography, Earth and Environmental Sciences, said: “Many Asian countries, including India, are undergoing rapid industrial development and urbanisation. This can be alarming due to the significant influence it exerts upon future air quality.

“India is facing extreme and rapid changes in air pollutants level, mainly fine and ultrafine particles level in different scenarios. We hope that our workshop will help us better understand the causes, sources and effects of pollution in India and the UK and how they differ.”

He added that University of Birmingham research showed that events such as Diwali celebrations and Guy Fawkes’ Night affected short-term air quality and lead to significant reductions in visibility.

Professor Mukesh Khare said: “Increasing air pollution in Indian and UK cities has become a major concern to citizens because of its impact on health and economy of the nation. Researchers in both countries have worked on different air pollutants under different conditions.

“However, in order to tackle pollution problems, we must integrate these research areas and bring young researchers together so that they understand the challenges ahead and work together to develop mitigation strategies.”

Dr Pope’s research used data taken over 13 years between 2000 and 2012 from 34 meteorological stations throughout the UK the scientists noted an average 25% reduction in visibility caused by atmospheric particulate matter from fireworks and bonfires.

The workshop has a particularly strong connection between Birmingham and Delhi. University of Birmingham PhD researcher Ajit Singh was a Masters student at IIT and has investigated the pollution and visibility in both India and UK.

Ajit Singh said: "Poor visibility can disrupt transportation, public safety and tourism, as well as causing economic loss. It is an indicator of poor air quality and, in our study, most UK stations show a long-term trend of increasing visibility indicating reductions in air pollution, especially in cities.

“However, annual visibility in Indian megacities like Delhi decreased rapidly due to high aerosol loading in past few years. This is alarming because most of the population are now living in cities and this pollution can directly affect human safety."

Fireworks celebrations usually involve both bonfires and ground and air detonating fireworks. The particulate matter that is scattered after detonation is hygroscopic – its water content is dependent on the local relative humidity.

As the humidity increases so does the water content of the particulate matter, changing the average size and composition of each particle, which leads to the particle being able to scatter light more effectively and hence reduce visibility.

The effects, which were especially pronounced when humidity was high, raise concerns regarding motorist and pedestrian safety. The visibility reducing effect of the extra particulate matter loading in the atmosphere can last up to two days after the fireworks event.