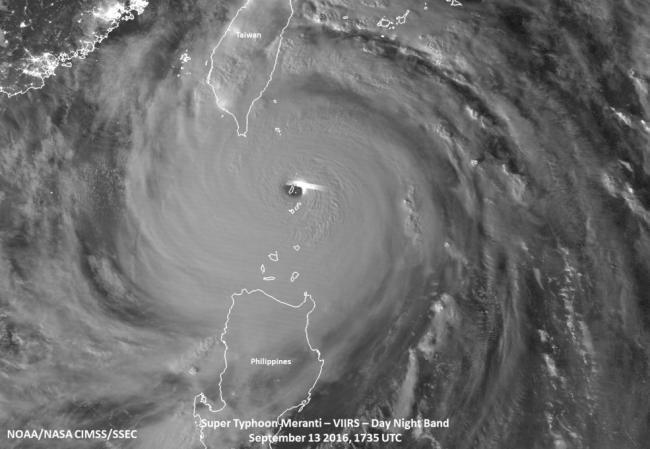 According to reports, winds have shattered windows on high buildings located in the area where the typhoon made the landfall.

"The winds and rain got extremely loud after 3 a.m. The cracking sound of windows and tree branches were also scary. The power went out in the shop for several times,"  Su Binglin, a night-shift shop assistant at a 24-hour convenient store, was quoted as saying by Xinhua.

Schools in many parts of China were closed on Wednesday as a precautionary measure.

On Sept. 14 the Visible Infrared Imaging Radiometer Suite (VIIRS) instrument aboard the NASA-NOAA Suomi NPP satellite captured an infrared image of Typhoon Meranti as it hit the island of Itbayat in the Luzon Strait.

VIIRS infrared data shows temperature and revealed that cloud tops north and northwest of the center were colder than  minus 70 degrees Fahrenheit (minus 56.6 degrees Celsius).

Cloud top temperatures that cold indicate storms stretching high into the troposphere and have been shown to generate heavy rain.

Suomi NPP also provided a night-time image at the same time when Super Typhoon Meranti as it hit the island of Itbayat. Itbayat is the largest island in the province of Batanes, northern Philippines.

"The waxing gibbous moon, which was 93 percent full provided quite a bit of illumination for the Day Night Band on VIIRS to observe quite a number of features, including (tropospheric) gravity waves emanating from the very well defined eye, mesovorticies within the eye itself, which were only visible in the Day-Night band and not the infrared band, and a lone lightning "streak" near the eyewall itself," said William Straka III of the University of Wisconsin-Madison, who created the images.

Meranti is moving toward mainland China where it will make landfall in Guangdong and Fujian in southern part of the country later in the day on Sept. 14 (EDT). The storm is then expected to dissipate inland.