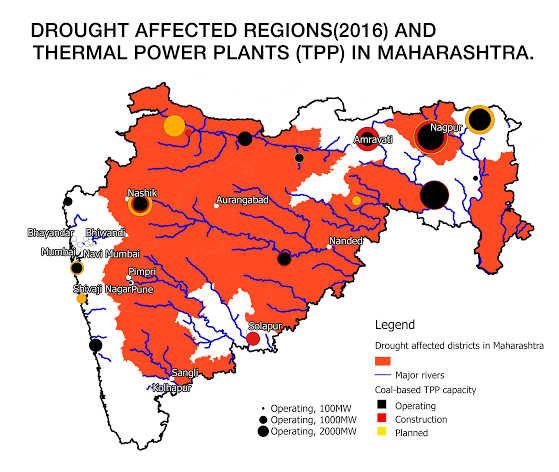 At present, Maharashtra has a total coal-fired power capacity of 16,500 MW; of this, almost 13,000 MW are located in high water stressed regions of the state, it said.  "These plants currently consume about 218 million cubic metres of water. In a move that will place further stress on the water situation a further clutch of coal power plants amounting to an additional 37,370 MW is being planned. This will more than double the current water consumption for coal and significantly worsen existing water stress.   “The scarcity of water is now an inescapable reality, placing severe stress on our agricultural systems, as well as the lives, livelihood and dignity of millions of people across the country,”  said Jai Krishna, Senior Campaigner, Greenpeace India.  “While water-saving measures are now imperative, we must also address the big question of just how we are using the limited water supply at our disposal,” he added.  "Colossal quantities of water are currently being provided to thermal power plants. As this Greenpeace report reveals, with a big expansion of the coal power infrastructure planned, an even greater quantity of water will be siphoned off into this industry. Maharashtra stands to lose an estimated additional 490 million cubic metres (17.3 tmcft) of water, if we were to consider both, proposed plants as well as those already under construction.  At conservative estimates, this much water would suffice to meet the needs of another 2.6 crore persons in the state." “The government needs to factor in water deprivation when calculating the real cost of coal. Clearly, continuing to increase our dependence on coal by building more coal power plants is going to be disastrous for farmers and all residents of the state. And as water conflicts increase, power plants will need to be shut down more often to preserve water supplies. This could lead to power plants becoming ‘stranded assets’ that are unable to recover money, making new plants a risky bet for investors and lenders as well,” concluded Jai Krishna. This summer has already seen temporary shut downs of KPCL’s Raichur power plant and NTPC’s Farakka plant due to lack of water. Mahagenco’s Parli power plant has been shut since July 2015 due to lack of water, it said.