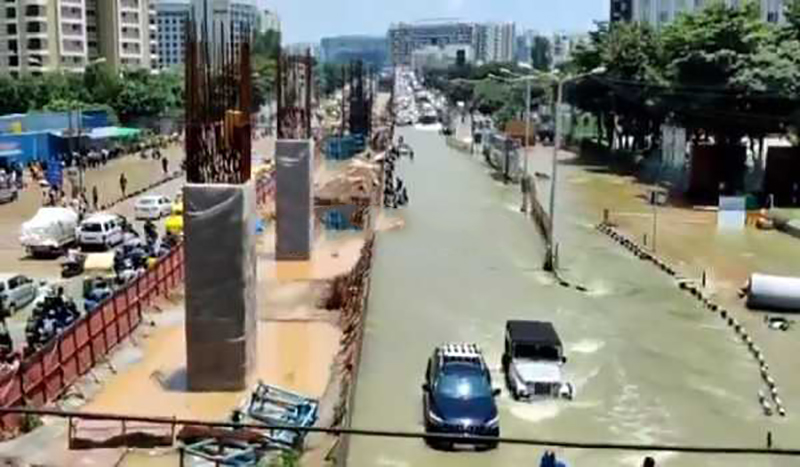 Waterlogging puts Bengaluru out of gear

The situation looked grim as several videos and photos were posted on social media by harried netizens even as the weatherman predicted copious rainfall across the state till Sept. 9.

People living in Karnataka's coastal belt have been asked not to venture into the seas during continuous rainfall.

A yellow alert has been issued to people living in Kodagu, Shivamogga, Uttara Kannada, Dakshina Kannada, Udupi and Chikmagalur districts.

A massive traffic jam was witnessed on Bengaluru's Marathahalli-Silk Board Junction Road which connects Bengaluru's IT hub.

For no reason therefore, the IT companies were up in arms against the state government as they complained of losing Rs 200-odd crore due to their employees reaching offices five hours late.

Taking note of their grievance, Karnataka Chief Minister Basavaraj Bommai promised to hold talks and give them compensation in an effort to assuage their ire.

In a grim rain-related incident a man was rescued by the local security guards after he was stuck on the road due to waterlogging and was not able to cross the road.

In some areas like Varthur, rafts and boats have been deployed to evacuate stranded people.

The fire department and other government departments are carrying out relief operations and trying to pump out the waterlogged arterial roads to restore traffic.

The authorities also have issued a traffic advisory asking residents to avoid going out of their homes except for emergencies and avoid sending their children to schools.

The situation in Bengaluru's northern parts also was grim.

The Kempegowda International Airport in the area received 109 mm of rainfall in the intervening night between Sunday and Monday.

The air passengers complained about waterlogging at parking areas outside the terminal.

Flight services also were disrupted at the airport, as many as six flights including two international planes heading to Bengaluru city from various destinations were diverted to Chennai Airport.

This is the second time in a week that Bengaluru is witnessing such severe waterlogging on many arterial roads.