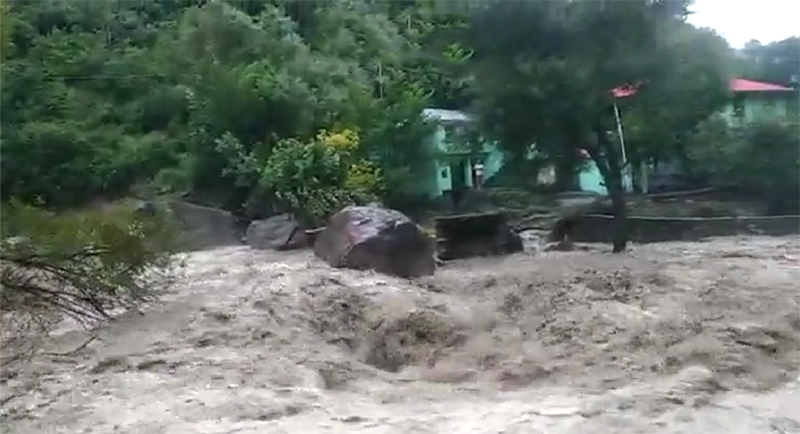 Shimla: Four people died and 15 others went missing in various rain related mishaps that occurred in Chamba and Mandi district of Himachal Pradesh during the past 24 hrs.

The state government spokesperson confirmed that seven cattle are missing and one cowshed and nine houses were damaged.

Six more roads were blocked by landslides and four vehicles were damaged while one bridge was washed away on Chaki river in Kangra district.

In village Kashan of subdivision Gohar of Mandi district a landslide hit on the house of Gram Panchayat Pradhan and eight people were stuck under the debris.

District administration and NDRF team was rushed to the spot. The mishap damaged two houses and a cowshed in which two cows and seven sheep were buried under the debris. In Village Kandi Gram Panchayat Dhar-Jarol of Mandi district another cowshed was damaged and one cattle died. One kitchen and house were damaged as they were hit by shooting stones.

In Village Kyoli of Lambathach under Thunag subdivision of Mandi district a house was washed away. One person was missing and three were rescued.

A Cloud Burst mishap occurred at Bagi in Mandi district near Parashar road where fiveKachha houses were washed away. NDRF team was rushed to the affected area. One died and eight were missing. Five houses were damaged by the flash floods deceased were identified as Suhani, daughter of Satar Muhamad.

Bridge between GP Majhiwar and Manju (Sunni) District Shimla got washed away due to heavy rainfall. Road.... pic.twitter.com/bCoQrpNeE2

In Shimla district a Landslide hit the HP Petrol pump at Theog, in this incident four vehicles were damaged.

In the state, about 26 rain related incidents took four lives and 15 others are missing. Half a dozen houses and Cowsheds and seven cattle and animals were killed in the rain. 336 roads are affected by the landslides and power supply also disrupted in 1523 places.

Heavy rainfall and landslides affected vehicular traffic at a number of roads including Chandigarh Manali National Highway at many places. Orange and Yellow alert was issued by the India Meteorological Department for the next three days in the state.

Chief Minister Jai Ram Thakur has expressed concern over loss to the lives and properties due to the torrential rains in various parts of the State.

Chief Minister has directed the district administrations of the State to immediately ensure relief, rescue and rehabilitation works in the affected areas. He said that as many as 5 deaths have been reported in the State during the last 24 hours and about 15 people were reported to have been missing.

He said that teams of NDRF and State forces have been rushed to the spots to undertake relief and rescue operations where people have reportedly been trapped/ stuck under the debris.

While expressing his grief over the deaths reported due to landslides and flash floods, the Chief Minister has prayed to the Almighty to grant peace to the departed souls and strength to the bereaved families to bear the irreparable loss.

Jai Ram Thakur has advised the locals as well as the tourists to stay away from landslide prone areas and riversides to avert any mishap.