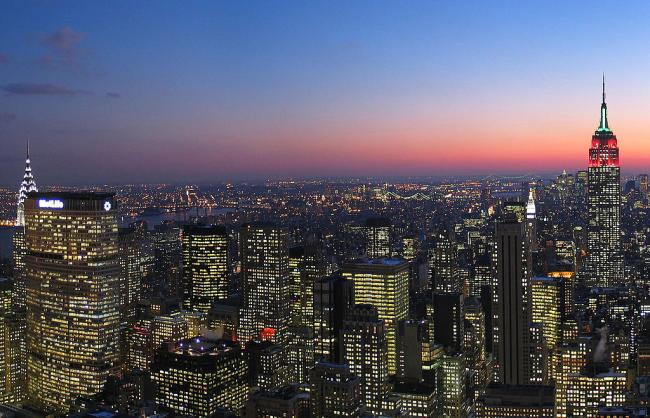 India Blooms News Service | | 07 Oct 2015, 02:29 pm
#CSE, # Climate change, # US Climate Action
New Delhi, Oct 7 (IBNS): In a severe indictment of the American Intended Nationally Determined Contribution (INDC), Delhi-based Centre for Science and Environment (CSE) has said the US is not doing anything extra for climate change; most of the changes are happening naturally and automatically because of economic reasons and market forces.

Worse, improvements are being squandered away because of increased growth and consumption, it said. The Centre released its study – titled ‘Capitan America: US climate goals – a reckoning’ -- here on Wednesday.   “The US INDC is neither ambitious nor equitable,” said CSE director general Sunita Narain while releasing the report. CSE is the first Southern think tank to have done such a comprehensive analysis of the US’s climate goals.   “Our analysis shows that the key economic sectors of the US economy – energy, transport, industry etc – are operating and would continue to operate till 2030 in a business-as-usual way, even as the rest of the world gears up to fight climate change,” adds Narain.   On energy Says Chandra Bhushan, CSE’s deputy director general: “The US has not put in place policies to shift its economy towards low carbon. The result is the US will produce and consume 20 per cent more fossil fuels in 2030 than what it does today. Renewable energy will only contribute about 15 per cent of primary energy in 2030 -- up from 11 per cent currently.”   Says Bhushan: “The Clean Power Plan (CPP), the most ambitious climate action of President Obama to reduce emissions from the power sector, is even less ambitious than business-as-usual. In 2005-2014, electricity sector emissions reduced 1.8 per cent annually, largely due to a switch from coal to natural gas. Under CPP, it will reduce only by 1.6 per cent from now till 2030. Even in 2030, about 60 per cent of US’s electricity will be produced from coal and gas.”   On transport While the rest of the world is realising that reining in transport-related emissions requires reinventing mobility so that people move, not cars, the US is in reverse gear. Per capita trips using public transport have declined and stagnated in the US; 86 per cent Americans commute using the car – a trend that shows no signs of changing. Passenger car emissions are growing every year by 1 per cent, and 2017 is projected to be the year of peak car sales.   “Our analysis shows that the over-reliance of the US on fuel efficiency standards for vehicles is not sufficient. As vehicles are becoming more efficient, Americans are driving more. The US will have to move away from private cars,” says Narain.   On buildings In 1980-2009, energy intensity in the household sector of the US declined a whopping 37 per cent. But in the same period, more houses were built and the size of houses increased 20 per cent. During the same period, the use of ‘efficient’ appliances increased dramatically – all this meant actual energy use remained stagnant and did not decline. The enormous gains that could have been made were, thus, lost.   On industry Industry is the only sector in the US where emissions and energy consumption has declined. But consumption of industrial goods has skyrocketed. The US is not making these goods. Instead, imported goods now account for 60 per cent of all goods purchased. Says Narain: “This means industrial emissions have not gone down, but merely been outsourced.”   Consumption is the problem The US climate policy does not address the issue of burgeoning consumption of goods and services. Consumption expenditure in the US has increased dramatically since 1990. In terms of value, the US has doubled its total consumption of goods and services during 1990-2014.   Says Bhushan: “The US’s per capita household consumption expenditure is double that of an EU-28 household, 24 times a Chinese one, 44 times an Indian’s, 64 times a household in Bangladesh and 173 times a Malawi household. Without curbing such high level of consumption, the US cannot realistically address climate change.”   Cheap energy drives consumption The increase in energy consumption and hence, CO2 emissions, is directly linked to cheap energy prices. In the US, energy prices have remained low and are getting lower. In 1990-2014, the urban consumer price index increased 81 per cent, but per unit cost of residential electricity reduced 12 per cent in the US. The result: per capita electricity consumption went up from 11,373 kilo-Watt hours/annum (kWh/annum) in 1990 to 12,113 kWh/annum in 2014. “These reductions in prices are actually counter-productive to all efforts made to improve energy efficiency,” points out Bhushan.   A divisive force, as we prepare for Paris The US has been the biggest divisive force in the UN climate change negotiations. The no-domestic-action approach of the US has transformed the UN Climate Change Convention from a forum where every nation was supposed to take action based on “common but differentiated responsibilities and respective capabilities” to a forum where nations are competing in a race to the bottom.   Says Narain: “The poor ambition of the US means that everyone has low ambition. Today’s climate action vocabulary accepts ‘bottom-up’, ‘nationally determined action’ and ‘voluntary’. These are US inventions and coinages. To suit only the US.”   She goes on to ask: “The big question confronting the world is should the climate convention again be tailored — as was done in Cancun in 2010 and Durban in 2011 — to suit the convenience of the US? Or, should the world come together to fashion a global deal, which will suit the poor and the most affected? This is the issue in Paris. Nothing more. All else is optics and roadshow.”