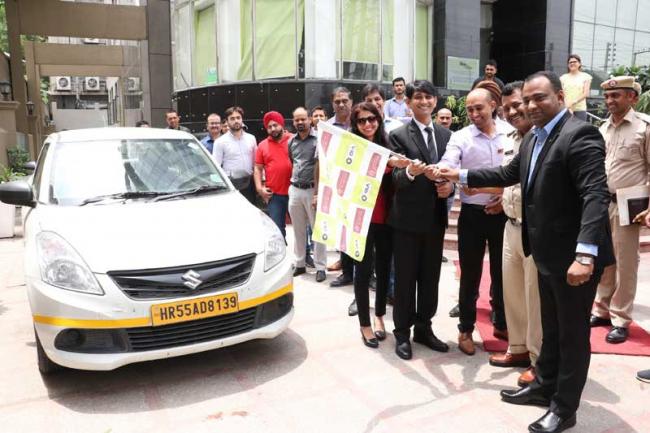 Gurugram, Aug 8 (IBNS): The District Legal Services Authority and Gurugram Police have partnered with Ola, India’s leading and one of the world’s largest ride-sharing companies, to celebrate Road Safety Week in Gurugram, with the recently launched ‘One Life’ safety awareness campaign.

This drive was launched with the aim to create awareness about road safety and to urge people to follow traffic rules, thereby avoiding loss of life and property.

He also inaugurated Ola Partner World (OPW), a one-stop shop for all driver partner needs along with eye check-up camps.

Ola is one of the first ride-sharing company to comply with the recent notification issued by the State Transport Authority that mandates drivers to paste a minimum of four stickers in their cabs.

This initiative is a second of its kind.

The first flag off of Ola cabs with child lock disablement stickers took place in New Delhi at India Gate in May 2018.

Ola plans to extend this initiative to other cities in the country over the course of this year.

Speaking on the occasion Narender Singh, Learned Chief Judicial Magistrate-cum-Secretary DLSA, Haryana said, “Road safety is a serious concern for all of us. Apart from the police, a collective effort is required from both, public and private organizations, to promote and implement road safety rules in the city. Cab and auto drivers are important stake holders of the city’s public transport system and it is important to inculcate better awareness about road safety in them. DLSA Gurugram is glad to be associated with Ola in this unique ‘One Life’ road safety awareness campaign and would like to commend the company for all its efforts in promoting road and ride safety initiatives.”

He exhorted other organizations to come forward and join hands for creating a robust law abiding society and safer nation.

Reiterating Ola’s commitment towards Road Safety A M Iktear Uddin (Anik), Head- Law Enforcements and Compliances - Ola, said, “Road safety is a quintessential part of Ola’s vision to make India a safe and sustainable city. As safety first organization, it is our aim to promote healthy living and safe driving amongst our driver partners. Ola recently launched the Street Safe program to promote road and ride safety and as part of this vision we have curated comprehensive eye checkups for all driver-partners in an accessible format at the newly launched Ola Partner World in Gurugram. We are delighted to collaborate with District Legal Services Authority and Gurugram Police to create awareness and spread the message of road and ride safety among the people of the city.’’