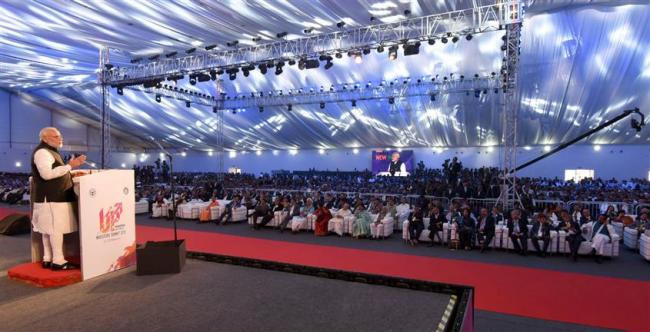 Lucknow, Feb 21 (IBNS): Leading industrial houses of India have pledged investment worth Rs 88,000 crore during the inaugural session of the UP Investors Summit 2018, which was inaugurated by Prime Minister Narendra Modi on Wednesday, in Lucknow, accoding to media reports.

He said, "Which is why, Reliance has built a world-class digital Infrastructure all over India, including in UP, in less than two years. With an investment of Rs. 250,000 crore so far. Today I am happy to inform this audience that Jio is one of the largest investors in Uttar Pradesh with investments of over Rs. 20,000 crore. Jio is providing the highest quality data at the lowest price in the world to over 2 crorecitizens of Uttar Pradesh. We have completely reimagined and rebuilt the next-generation digital communication services."

"Jio will invest another Rs 10,000 crore in Uttar Pradesh over the next three years, " he said, "JioPhone will available for a nominal deposit of Rs 1500, which is refundable after three years -- for which Jio will make available over two crore JioPhones in UP within the next two months on a priority basis -- and Jio will establish a Centre for the Fourth Industrial Revolution within the campus of a reputed university in Uttar Pradesh," he said.

Gautam Adani, Chairman, Adani Group said that he was glad to have been part of the  UP Investors Summit.

"Hon’ble Chief Minister, it is our commitment to stand with you on your journey of transforming Uttar Pradesh into a progressive and industrialized state," he said addressing Uttar Pradesh chief minister, Yogi Adityanath.

Kumar Mangalam Birla, Chairman, Aditya Birla Group,  said his group has "made an investment of Rs 24,000 crore in the state and have 15 manufacturing plants. We have created 40,000 direct and about 1 lakh indirect jobs."

He also said  his Group will invest Rs 25,000 crore in multiple businesses in the next five years, according to media reports.

The Prime Minister and other dignitaries also visited the exhibition kiosks at the trade pavilion, reports said.

Earlier in the day, the Prime Minister in a tweet said, "Will be in Lucknow today, to take part in the UP Investors Summit, which will showcase the rich potential of UP to attract top quality investment. Under CM @myogiadityanath Ji, the state’s progress journey has got a strong impetus. @InvestInUp."

The event has been organized by Uttar Pradesh Government to showcase the investment opportunities and potential in the state.

Finland, Netherlands, Japan, Czech Republic, Thailand, Slovakia and Mauritius have been identified as country partners for the event. Several memorandums of understandings (MoUs) are expected to be signed during the summit.