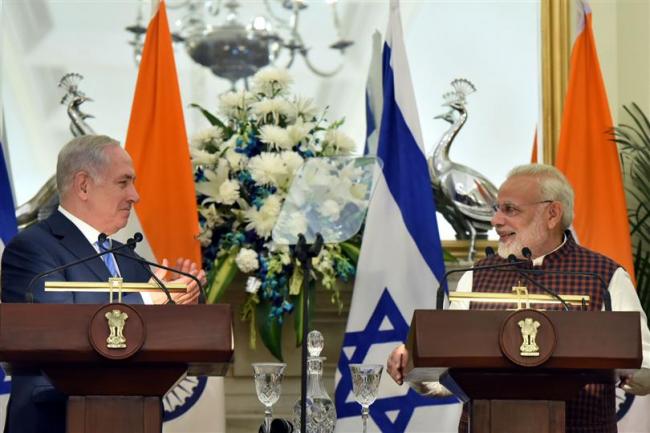 New Delhi, Jan 16 (IBNS): Given the scale of the Indian economy and the relevance of cutting-edge Israeli technologies,  even sky is not the limit for what both countries may achieve together, said Indian Prime Minister Narendra Modi, highlighting the India-Israel business summit.

Israeli PM Benjamin Netanyahu too appreciated PM Modi's faith in Israel and said, "I arrived in India with the biggest delegation of business leaders that has ever joined an Israeli PM on an official visit. The goal: to deepen the economic ties between India and Israel."

Excerpts from the PM Modi's speech at the India-Israel Business Summit which took place on Monday:

"I welcome Prime Minister Netanyahu and members of the Israeli Delegation on behalf of all my countrymen. It is an added pleasure to be with the CEOs of both countries. Prime Minister Netanyahu and I have just completed a fruitful interaction with Indian and Israeli business leaders through the bilateral CEOs Forum. I have high hopes from this interaction and partnership of CEOs, which started last year.

I have always had a deep regard for Israel and its people. I visited Israel in 2006 as Chief Minister of Gujarat. Again last year in July, I visited Israel, the first such visit from India.

It was a very special visit. I experienced at close quarters the remarkable spirit of innovation, enterprise and perseverance that drives Israel. There is new energy and purpose that has in-vigorated our ties over the last few years. It will help take our cooperation to greater heights. We stand on the cusp of a bright new chapter in India-Israel relations driven by our people and the mutual opportunities for betterment of their lives.

The role of business and industry is crucial in the transformation of our ties. It is your combined efforts that will add real value to our interaction and produce concrete successes. Given the scale of the Indian economy and the relevance of cutting-edge Israeli technologies for us, even sky is not the limit for what we may achieve together!

I am delighted that today we have launched the maiden call for joint R&D projects under the ‘India-Israel Industrial R&D and Technological Innovation Fund (i4F)’ which was announced during my visit to Israel last July. This Fund, to be utilized over a period of 5 years, is a welcome opportunity to combine the talent pool of the two countries in pursuit of path-breaking technological solutions that can be commercially exploited.

I strongly encourage enterprises in both countries to utilize this platform. Equally exciting is the pick up in science and technology exchanges through joint R&D projects such as in areas like "Data Analytics” and "Cyber Space security”.

I am happy to note that the India-Israel Innovation and Technology Conclave is going to be held in India in July 2018. I hope this Conclave will spur co--development of new technologies. In fact, the ground-work for this will be started from iCREATE day after tomorrow. We are both going to Gujarat to inaugurate this campus, which is being developed as a leading innovation hub.

I am taking Prime Minister Netanyahu to rural areas of Gujarat because the real power of technology and innovation lies in the benefit it brings to the common man. Israel is universally known as the Start-up nation with a unique eco-system for innovation and incubation.

The credit for this goes to the Israeli entrepreneurs. You have made Israel a strong, stable and innovative economy. You have made a country of 8 million people, shine as a global power-house of technology.

Whether it is Water Tech; or Agri-Tech; whether it is food production, its processing or conservation; Israel has been a shining example with new breakthru and advances. Whether it is physical or virtual security; whether it is on land, water or space; your technology has won admiration. In fact, hailing from a water deficient state in India, I have particularly admired Israel’s water efficiency.

In India, we have been taking steady steps over three years at both macro as well as micro-level, to make a difference. Our motto is: Reform, Perform and Transform.

The results are two-fold. On the one hand, our procedures, processes and systems are getting aligned with the best in the world. Secondly, we are able to maintain the pace of faster growth.

In spite of deep structural reforms, we are among the fastest growing major economies. FDI inflows are at an all-time high, with 40% rise. Tremendous work is being done to skill and employ the youth. 65% of our population is below 35 years of age and is hungry for technology-enabled growth.

This is our greatest opportunity as well as challenge. For this purpose, we have started the Start-up India campaign. There is vast potential for India-Israel partnership in this area. The India-Israel Innovation Bridge will act as a link between the Start-ups of the two sides. I have been saying that Indian Industries, start-ups and the academic institutions must collaborate with their Israeli counterparts to access the huge reservoir of knowledge.

India has size and scale.
Israel has sharpness and edge.
There would be many ideas and technologies that can be useful for or can be commercially scaled up in India.

Today, we have emerged as one of the largest manufacturing nations. But we are not done yet. We are positioning India as a global manufacturing hub leveraging the energy of our youth.

The ‘Make in India’ initiative is designed to help achieve this. Through these initiatives, combined with the new eco-system of a formal economy and a unified tax regime, we are trying to create a NEW INDIA.

We are particularly keen to develop India into a knowledge-based, skill-supported and technology-driven society. A grand beginning has already been made through Digital India and Skill India. To enable this transformation, in the last few years, my Government has undertaken substantial reforms.

We have resolved a number of regulatory and policy issues facing the businesses and companies. We have worked sincerely on ‘ease of doing business’ in India.

The results are there to see:

In the last three years, India has moved up 42 places in the index of Ease of Doing Business of World Bank;

We have moved up 21 places on the Global Innovation Index of WIPO in two years.
We have also moved up 32 places in last two years in the Global Competitive-
ness Index of the World Economic Forum - the highest for any country;
We moved 19 places on the Logistics Performance Index of 2016 of World Bank ;
We are among the top 10 FDI destinations listed by UNCTAD But we will not stop.
We want to do more and do better.

To enable entry of capital and technology, most of the sectors including defence, have been opened for FDI. More than 90 percent of the FDI approvals have been put on automatic route.

We are now among the most open economies. Just a few days ago, we have allowed 100% automatic route FDI in single brand retail and construction development. We also opened up our national carrier, Air India, to foreign investors.

Every day we are making it easier to do business in India. In taxation, we have carried out a number of historic reforms. The path breaking GST reform has been introduced successfully and smoothly.

It is by far the biggest business and economic reform India has ever done. With introduction of GST and of Financial Technologies and digital transactions, we have really moved towards a modern tax regime, which is also transparent, stable and predictable.

Several Israeli companies have joined hands with Indian companies for Making in India. Many others, especially those with advanced water technologies and agri techniques, defence and security systems, and pharma knowledge have a foot-hold in India. Similarly, Indian companies have significant presence in several sectors in Israel like IT, Irrigation and Pharma.

Diamond remains a strong link in our trade. There are more business joint ventures today than before. However, this is just the beginning. Our trade with Israel has grown to more than 5 billion dollars.

But this is still well below the real potential. We must attain the full potential of our ties. This is not only a diplomatic imperative but also an economic one. I welcome your suggestions on how to unlock our combined potential. The spirit of innovation, adaptation and problem solving is inherent in both countries.

Just to give you an example:

Imagine the environmental and economic gains if we can collaborate to save wastage and if we can add value in our fruits, vegetables and horticulture! Similar is the case with water.

India’s development agenda is huge. It presents a vast economic opportunity for Israeli companies. I invite more and more Israeli people, businesses and companies to come and work in India.

Along with the Government and people, the business community of India too is keen to join hands. I wish your companies and ventures all success. I assure you of my support and that of my Government wherever it is required. And I thank Prime Minister Netanyahu for his continuous support in fast-tracking India-Israel trade and economic collaboration. I am confident many successes lie ahead for our partnership."