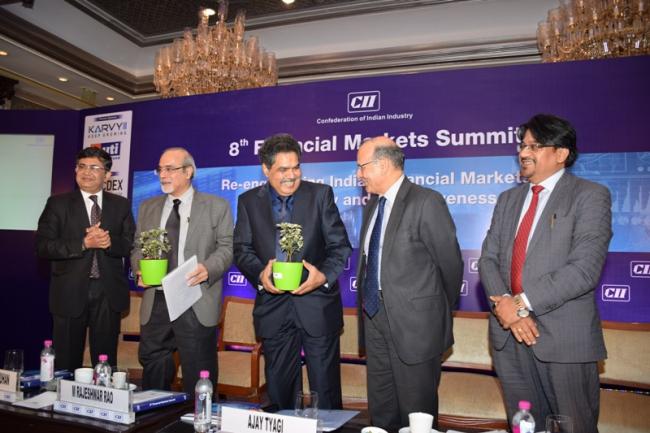 Mumbai, Dec 21 (IBNS): Financial Markets Regulator SEBI (Securities and Exchange Board of India) is not looking at taking up too many cases for punitive action – rather, it aims at taking action only in such cases where strong action is merited.

“There is need for a balance to be maintained between investor protection and punitive action, to encourage the ‘ease of doing business’, said Ajay Tyagi, Chairman, SEBI.

The 8th CII Financial Markets Summit was held on Wednesday in Mumbai.

Terming the current year as ‘excellent’ for capital markets in India, he said the amount of funds through primary issues this year rose by more than the previous six years combined.

Tyagi attributed this to enhanced confidence as a result of reforms as also the regulatory regime.

“When confidence is high, investments grow,” he said, adding that instead of ‘big bang reforms’, smaller improvements in the ‘nuts and bolts of things that matter’ might be a better alternative and would lubricate the system.

The SEBI Chairman credited government policies and sustained reforms as also improvement in ease of doing business, and an enabling regulatory framework for the positive scenario.

Speaking on the query that ‘uninformed investors’ were investing in the derivatives market, he said SEBI has come out with a consultation paper on derivatives and will take a final view by end of the financial year.

“SEBI has received feedback on the consultation paper, and will be taking a perspective keeping in mind investor protection soon,” he said.

Reforms in financial sector having fuelled growth in the capital market; the need to standardise KYC norms so that the same could be used across investment platforms; the impact of new investment classes like Crypto-currency and the positives as a result of enhanced use of information technology in distribution channels were topics the SEBI Chairman spoke about.

According to M Rajeshwar Rao, Executive Director, Reserve Bank of India, Indian Financial Markets have shown a strong growth momentum on the back of reform measures undertaken by policy-makers at various levels.

Delivering a special address during the summit, he said, “The necessity to push India’s growth trajectory to a higher level is boosting the investment appetite of the country, thereby propelling the need to further develop all segments of financial markets.”

Along with developing individual segments of markets, there is a need to focus on interconnecting segments of the markets, so that efficiency and attractiveness would be further enhanced, he said.

Speaking on Bond Currency Derivatives (BCD), he stressed on aspects for development of BCD and exploring the opportunities to inter-connect them. The RBI ED also spoke about furthering the growth and development of Commodities Market.

Given the infrastructure growth across India which was in the pipeline, Ashishkumar Chauhan, Managing Director and CEO, Bombay Stock Exchange said capital markets would play a major role in ensuring funding for India’s infrastructure push, which was estimated to be US $ 200 bn p.a. for the next decade.

“Indian financial markets had shown a strong growth momentum on the back of reform measures undertaken by policy-makers at various levels, and the necessity to push India’s growth trajectory to a higher level is boosting the investment appetite of the country, propelling the need to further develop all segments of financial markets,” he said.