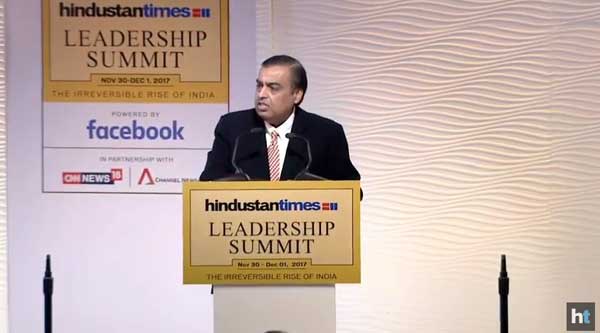 New Delhi, Dec 1 (IBNS): Mukesh Ambani, Chairman and Managing Director Reliance Industries Limited, while speaking at the 15th edition of the Hindustan Times Leadership Summit in New Delhi, on Friday, reminded the gathering that in 2004 he had said that India will be an USD 5 trillion economy in twenty years.

"Today that prediction seems certain. Indeed, it will be achieved well before 2024," he said.

Excepts from his speech:

"Today, this summit is about India emerging as a pre-eminent global leader.

Dear Friends, I come from the world of business.

Any nation’s leadership role is determined, first and foremost, by its economic leadership.

Therefore, I want to talk about why India will become a global economic leader.

Today India’s GDP is about USD 2.5 trillion, and ranks at No. 6 in the world. Can we triple it to USD 7 trillion in the next ten years and become the third largest economy in the world?

Can we cross the USD 10 trillion mark by 2030, and close the gap between India and China, and India and USA?

Can India become the most prosperous nation in the world, overtaking both USA and China, within this century?

Yes, most certainly we can.

We are seeing â”€ and the entire world is seeing â”€ a new and resurgent India. And I believe that the coming three decades will be the defining decades for India.

In 2047, India will celebrate the centenary of our Independence.

Around the same time, China will celebrate 100 years of the birth of the People’s Republic of China.

Today the whole world is talking about China’s Rise and India’s Rise.

This is civilizational re-birth for both India and China. There is nothing surprising about it.

In the long history of mankind, India and China were the most prosperous nations before the 17th Century.

After a short interval of about 300 years of western domination, the centre of gravity of world economy is shifting back to India and China.

But, friends, today I wish to make a prediction.

By the middle of the 21st century, India’s Rise will be higher than China’s Rise.

And more attractive to the world.

Yes, India’s Rise will be higher than China’s Rise and more attractive to the world.

India will provide a superior and different development model.

A model that will create equitable and inclusive growth based on technology, democracy, good governance and a society-wide culture of empathy.

Energy and technology have been the key drivers of human progress.

No country has ever emerged as a global power, without embracing new technologies whole-heartedly…and without using new-generation energy sources widely.

It began towards the end of the 18th century in England and lasted for over a hundred years.

This shifted the economic power from China and India to Europe.

The Second Industrial Revolution used electricity and oil to mechanize and mobilize industrial processes for mass production and distribution.

It started towards the end of the 19th century and prevailed for roughly another hundred years.

And this shifted the center of economic power to the US from Europe.

The Third Industrial Revolution that began roughly in the mid-1970s used electronics and information technology to increase productivity, automation and greater customization.

The US was the key beneficiary of this, followed by Japan.

Among the developing nations, China benefited from this to emerge as the manufacturer for the world.

Each technological revolution completely rewrites the rules of the game and creates a new world order.

It creates opportunities for early adopters of that technology to leapfrog into positions of global leadership, power and influence.

Through the first two Industrial revolutions, India remained on the fringes. India started catching up in the computer-driven Third Industrial Revolution.

The Fourth Industrial Revolution is now upon us.

The foundation of this revolution is connectivity, computing, data and artificial intelligence.

It is marked by a fusion of technologies straddling the physical, digital and biological worlds.

Human civilization will collectively achieve more in the next 30 years than what it has achieved in the last 300 years.

I think it is crucial for all Indians to fully understand, internalize and change their mindsets on three defining characteristics of this new age.

The first defining characteristic… is that the world will go from linear to exponential.

But in an exponential world… you can go one, two, four, eight… and with 30 steps you can travel a billion meters… more than 2.5 times the distance to the moon.

Just think about it…

These were science fiction just a few years ago. Today they are facts of science.

Early adopters of each of these shifts will have the opportunity to leap-frog the competition, and create unprecedented societal value.

Those who do not, will be out-competed. They will become irrelevant.

The second defining characteristic… is that we will go from scarcity to abundance.

For most of our history, humanity has progressed by extending our mastery over nature, and by marshalling natural resources.

But, in the digital age, when you put the power of data connectivity, computing, software, information and intelligence together, the price/ performance of everything changes drastically.

Combined with the rapid strides we are making in renewable energy, life- sciences, robotics, 3D printing and machine-intelligence…what we are looking at is the future possibility of abundance in the true sense of the word.

And unlike the past, this abundance will not be for just a privileged few – but for all.

I believe that we are at the doorsteps of creating ubiquitous availability and affordability in each of these areas, for every human being on earth.

The third defining characteristic is that we will see a migration from a goods and services economy to one powered by intelligent services.

Today, with state-of-the-art digital techniques, it is already possible to monitor billions of data points from smartphones and other connected devices in real- time, all the time.

This information is continuously analyzed by machines, and a service can be provided automatically… not just in response… but even in anticipation of a customer’s needs.

There is no doubt that in the coming years, machine intelligence will augment and multiply biological intelligence manifold.

I believe that intelligent services are the next frontier of competitive differentiation and market leadership across industries.

We are in the age of super-intelligence.

What manufacturing was for China, super-intelligence will be for India.

We have the opportunity to not only rapidly grow our own economy, but also to be the provider of intelligent services to the rest of the world.

In this hyper connected world, this will mean that a talented craftsman even in the remotest Indian village can participate in the global marketplace.

Technology is a great leveler.

It provides equal access to all without prejudice or judgment, benefiting only those who are best prepared.

It’s my firm conviction that India can not only participate in the fourth Industrial Revolution, but has the opportunity to be a leader.

And I have three reasons for this conviction.

One, India is a very young nation with 63% of its population under the age of 35 years.

I have no doubt that they will make India the Number One Start-up nation in the world.

Two, India’s historical lack of infrastructure is actually a boon in disguise. Not having any legacy technology base means we can skip multiple generations of technologies… and directly embrace the next generation.

Three, most importantly, we have the political vision, leadership, determination and ability to make India a technology leader.

Our Prime Minister’s Digital India vision has created an alignment amongst all political parties in this mission of making India a technology leader.

Each and every one of our 29 states has embraced this vision. Collectively, these three factors have perfectly positioned India to be a leader in this new age."

Ambani went on to praise the implementation of Aadhaar, activities of the Indian Space Research Organization or ISRO and mobile broadband adoption.

We now have the opportunity to digitally reinvent all sectors of our economy, whether it is financial services, commerce, manufacturing, agriculture, education and healthcare."

He also discussed in detail about the progress India needs to make in three important sectors â”€ agriculture, education and healthcare â”€ and why.

"Reliance is a proud participant in India’s Rise," he said, "and privileged to serve this New India."

He said, "I have been fortunate to participate in building global-scale Reliance businesses in energy, information and digital services. As energy and information converge in future, Reliance will contribute even more significantly to India’s Rise.

Five years ago, when most Indian businesses were investing outside India, we decided to invest about USD 60 billion in India. We have nearly completed this investment cycle. We are now ready to commit even more in our next investment cycle.

We are doing this out of our undiminished conviction that India is the biggest investment opportunity in the world."

Ambani also urged foreign investors to invest and become 'a part of of India’s Rise'.