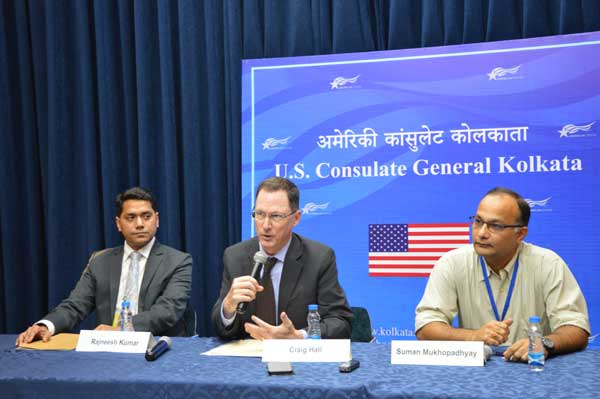 Kolkata, Nov 22 (IBNS): After the successful networking meets in Guwahati, Patna and Ranchi, the US Consulate General Kolkata, in collaboration with the social enterprise Contact Base, launched a youth entrepreneurship initiative – Y4BIZ (Youth for Business) in Kolkata recently.

The website www.Y4Biz.com was also launched during the event by US Consul General Craig Hall and Ananya Bhattacharya, Director, Contact Base.

The Y4BIZ program aims to support a promising group of 50 young entrepreneurs, and transform their business ideas from the initial stage to a sustainable business model, according to a release.

The 50 entrepreneurs will be selected by a rigorous screening process after the launch events in all four cities, which is when online registration begins.

{image_1}This will be followed by an online capacity building and mentoring program run by the IC2 Institute, University of Texas, Austin.

A group of 10 mentors will also be selected from Eastern India and who will be trained at the Nexus Incubator Hub, which is housed inside the American Center in New Delhi.

The mentors will work with the 50 entrepreneurs on a regular basis and through selected boot camps.

{image_2}Finally, the top 10 business ideas will be showcased at the American Center in Kolkata before industry leaders, investors and policy makers.

The top three business ideas will have the possibility of being incubated at the Nexus Incubator Hub in New Delhi American Center.

Director of the American Center and Public Affairs Officer of the US Consulate General Kolkata, Jamie Dragon, said, “Youth entrepreneurship development is a proven strategy that positively impacts the lives of young people.  This project seeks to foster a culture of entrepreneurship in eastern India and to strengthen linkages between American and Indian youth leaders.”

{image_3}Organized annually since 2010, GES is an annual entrepreneurship gathering that convenes over one thousand emerging entrepreneurs, investors, and supporters from around the world, according to the release.

This year’s summit, hosted jointly by the United States and India, will be held for the first time in South Asia.

The theme for #GES2017 is “Women First, Prosperity for all,” and will focus on supporting women entrepreneurs and fostering economic growth globally.

Ivanka Trump, Senior Advisor to the President will headline the United States delegation to the summit. ‎

The Director of Nexus in the New Delhi American Center, Erik Azulay said, "Nexus and the IC2 Institute of the University of Texas look forward to working with the American Center in Kolkata and Y4Biz to strengthen the entrepreneurial ecosystem in Eastern India.  We are glad to share our expertise in innovation and entrepreneurship with a partner such as Y4Biz which shares our vision and passion for supporting startups.”

Suman Mukhopadhyay, Director & Vice President (Finance & Strategy) of Contact Base said, “An entrepreneurs' journey is a journey of loneliness. For first generation early stage entrepreneurs this can be a daunting challenge to surmount. If one is attempting to start an enterprise in the eastern region of India, odds are stacked too unfavorably. An initiative like Y4BIZ, that intends to create a network of mentors, entrepreneurs, incubators and policy makers; that will work closely with the stakeholders towards evolving favorable environments for startups. This can help transform the landscape of entrepreneurship in this region”.